AMERICA/URUGUAY - Towards the cause of canonization: Salvador García Pintos: a politician, doctor and father 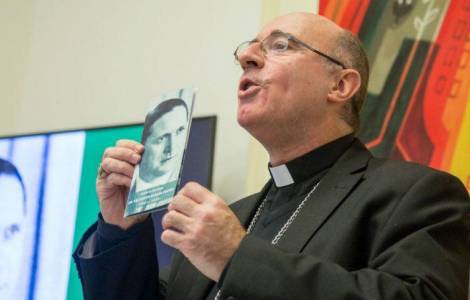 2019-09-27
Extraordinary Missionary Month: "we must all take on the responsibility so that everyone meets Christ"

2019-05-21
The mission "Everyone’s home": two thousand lay missionaries in the streets of the capital to meet those who moved away from the Church

2019-03-14
Towards the Missionary Month: promoting the same vision of the Church that goes forth, strengthening the leadership of the laity

2019-03-11
The Bishop of San José de Mayo: "a pastoral reconfiguration to put everything we are and we have at the service of the mission"

2018-07-27
Towards the cause of canonization: Salvador García Pintos: a politician, doctor and father

2018-05-04
Confirmation of the National Director of the PMS, Fr. Leonardo Rodriguez

Montevideo (Agenzia Fides) - The cause of canonization of Dr. Salvador García Pintos officially began on 25 July in Montevideo. He was a doctor, politician, professor, journalist, director of Catholic civil society institutions, married and father of seven children. Born in Montevideo in 1871, he died in La Floresta in 1956. The deed of settlement of the diocesan court, presided over by Cardinal Daniel Sturla, Archbishop of Montevideo, was held in the archdiocese, in the presence of numerous descendants of the Servant of God.
Some of them are the promoters of the cause, through an association created for this purpose.
The promoter, Gerardo García Pintos, read excerpts of the letter in which they asked the archdiocese to open the trial: "since his death, the life of Salvador García Pintos has been exemplary not only for his numerous descendants, but also for the 2,273 people who have explicitly adhered to the request to present the case. And the Facebook page, created less than a year ago, has already been visited by about 50,000 people, with increasing news of people asking his intercession and there are written cases that testify his holiness".
Cardinal Sturla described the doctor as "a person who defended human life from conception", alluding to his role as a parliamentary opponent of the legalization of abortion in the 30s - which, thanks to his work, returned to be considered a crime. Marta, one of the two doctor’s children who is still alive, spoke to those present: "The Pope defines the Beatitudes as the 'identity card of Christians'. I saw how my father lived them and how he practiced love for his neighbor described in chapter 25 of the Gospel of Matthew. "The court will now have to gather testimonies and documentary evidence to demonstrate the candidate's practices of heroic virtues.
At the end of the diocesan phase, which may last a few years, an extensive report will be sent with the relative documentation to the Vatican where the process will continue, which, if successful, will declare García Pintos venerable. It will be necessary to confirm a miracle through his intercession in order to be declared Blessed and, subsequently, a second for the declaration of his holiness. The cause of the Uruguayan García Pintos is added to those of his compatriots Consuelo and Dolores Aguiar Mella, blessed, martyrs of the Spanish civil war; Jacinto Vera, first Bishop of the Country; of the servants of God Walter Chango and Isidro Alonso (Father Cacho) and of the Blessed foundress of the Capuchin Sisters of Francesca Rubatto (born in Carmagnola, in the province of Turin, Italy) and died in Montevideo. (SM) (Agenzia Fides, 27/07/2018

ASIA/PAKISTAN - Paul Bhatti: hope and commitment for Shahbaz Bhatti to be declared a "martyr"

AFRICA/ZIMBABWE - A lay missionary, an apostle of lepers, towards beatification

AMERICA/ARGENTINA - When fundamental rights, the right to life are denied, all human rights are hanging by a thread

AMERICA/ARGENTINA - "Yes to women, Yes to life": a great prayer for life on 8 March announced by the Bishops