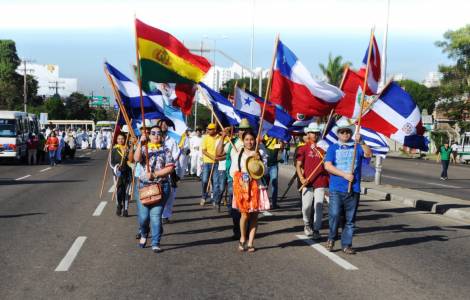 2021-10-23
Giving one's life so as not to abandon the elderly: the missionary witness of the religious who died of Covid

Santa Cruz de la Sierra (Agenzia Fides) - With the great missionary impulse of Pope Francis, "the realization of CAMV was undoubtedly a moment of grace for the Church in America, through which the mission of the whole Catholic community can be revived in order to be present in all the realities of the world with the transforming power and with the joy of the Gospel, which impels us to work by opening ways of communion and reconciliation in the social, political, interreligious and ecclesial fields". These are the first conclusions of the Fifth American Missionary Congress, CAM 5, read before the closing Mass of the event, on the afternoon of Saturday 14 May, in Plaza de Cristo Redentor, in Santa Cruz, by Fr. Pepe Cervantes, member of the CAM theological commission.
"With a missionary and evangelizing sentiment and with prophetic audacity - the text continues - this Congress will promote, from now on, changes in activities and ecclesial structures, so that this Church which "goes forth" faithfully responds to God in his open mission 'Ad Gentes', especially towards the poor and the marginalized, those who do not know Christ or the values that flow from the Gospel of joy".
Following the guidelines of the Second Vatican Council and the Conference of Celam in Aparecida, according to which "the Church is essentially missionary when she opens herself to the challenges of the contemporary world to find the right answers starting from the Gospel and the Word of God", the participants are aware of "the great, rapid and profound changes, that shake the cultures and societies of this postmodern era". Among the challenges that most concern the Church, some phenomena that affect the continent in particular are mentioned: the crisis of the family with all the problems that derive from it, the contempt and violence against life and human dignity, the violation of human rights, the economic dominion of a few that generates unemployment and poverty, injustice and lack of solidarity, the need to take care of Sister Mother Earth, the inequality and violence to which women are subjected, migrations, indigenous peoples, the obscure aspects of the Church itself, affected above all by the scandals of pedophilia, the decrease of priestly vocations, the weak and relativist modernity, the negativity and immorality inherent regarding this modernity.
These topics were widely dealt with and discussed, especially in the international Symposiums and in National Missionary Congresses and in other initiatives of all the Churches of America, which guided the works of CAM 5. Fr. Cervantes stressed: "we experienced five intense days of different activities that captured the attention of all the participants". He then thanked all those who collaborated in the organization and celebration: Mgr. Sergio Gualberti, Archbishop of Santa Cruz who presided over the works; Mgr. Eugenio Scarpellini, director of the PMS of Bolivia, who coordinated it; Cardinal Fernando Filoni, Special Envoy of Pope Francis; Bolivian Cardinal Toribio Ticona; Archbishop Giovanni Pietro Dal Toso, President of the PMS; Sr. Roberta Tremarelli, Secretary General of the Pontifical Missionary Childhood Society; all the American delegations of the Pontifical Mission Societies, the Episcopal Conference of Bolivia, a large number of Bishops of America and other countries, priests, religious and a crowd of lay people. In total 3,177 registered participants. Among the volunteers for the reception of the missionaries and the families of Santa Cruz who welcomed them in their homes, the number of 3,830 was reached. "An enormous demonstration of enthusiasm and service, dedication and joy". In addition to the opening session, there were five main conferences on the topics of the Congress, and twelve workshops, four conversations and five sub-groups were held every day in the afternoon, discussing the problems raised in the morning.
The concluding document then presents a series of lines of action to be undertaken for the missionary renewal of the Church in America: to educate to the joy of the Risen Lord and of the Beatitudes; to go to the peripheries of the world to meet the "other"; to encourage the knowledge of the Bible and the Gospels; to promote communities of missionary life; to encourage reconciliation in all areas of life; to promote awareness of the prophetic and liberating mission in all social areas; to consider the evangelization of the family as a Christian key to social and cultural transformation; to encourage a more ministerial and lay missionary Church; to promote and take care of vocations to priestly and religious life; to celebrate popular faith and religiosity in a missionary key. (SL) (Agenzia Fides, 16/7/2018)