AMERICA/NICARAGUA - Cardinal Brenes, bishops and priests attacked inside the church: "Never seen anything like this in Nicaragua" 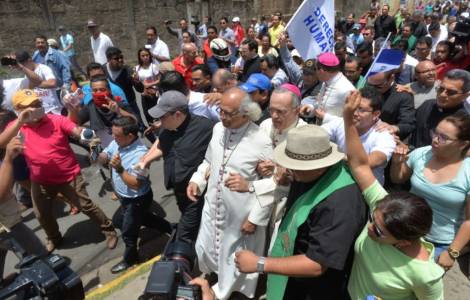 2021-02-22
Bishops to the government: elections, an opportunity to resolve the country's crisis

2021-01-12
"Politics is not the simple art of managing power, resources or crises", warns Bishop Álvarez, in the face of the increase in violence

Managua (Agenzia Fides) – During the weekend, a lot of blood was shed in the area of Carazo, with an unknown number of deaths, 9 or maybe more, due to the result of the increasingly violent repression of the government against the population that continues its protest. The episode that saw the paramilitaries break into the Basilica of San Sebastian, in the town of Diriamba, 40 km from the capital is very serious, where sacred furnishings was violently destroyed and the Bishops, priests and people who had taken refuge, including journalists, were physically assaulted.
"We were attacked with a brutal force," informed Cardinal Leopoldo Brenes, Archbishop of Managua and President of the Nicaraguan Episcopal Conference, who together with Auxiliary Bishop Silvio Baez, and Apostolic Nuncio, Mgr. Waldemar Stanislaw Sommertag, were in the Basilica. Yesterday they went to Diriamba, called by the local priests, to defend a group of nurses and Franciscans who had taken refuge in the sacred place as they were found guilty of having treated the wounded of the clashes (see Fides 22/06/2018). The basilica had been surrounded by about 200 hooded paramilitaries, as well as heavily armed police men, some with their faces covered.
According to Fides sources, when the Catholic delegation arrived at the church, accompanied by representatives of the Nicaraguan Association for Human Rights (ANPDH), the agents wearing a uniform disappeared, so the hooded men acted undisturbed, raiding and desecrating the sacred place.
"We have never seen anything like this in Nicaragua and it is really sad", Cardinal Brenes told reporters after gathering in prayer at the Cathedral of Managua on the way back from Diriamba. "With violence we walk along a dead end road, problems are resolved with reason and dialogue" wrote on twitter Mgr. Báez, who was injured in the attack.
This attack against Bishops takes place in the context of the socio-political crisis that gets worse and worse. Last Saturday, July 7, President Ortega publicly expressed the decision not to resign, as requested by the Bishops who are mediating how to get out of the serious situation: "The rules were established by the Constitution at the behest of the people. One cannot change because a group of coup leaders want it", he said, expressing threatning words to the Bishops. Fides' followers inform that Ortega has ordered an energetic action to put an end to the protests before July 19, the date of the 39th anniversary of the triumph of the Sandinista revolution. (CE) (Agenzia Fides, 10/07/2018)