ASIA/PHILIPPINES - Focolare Youth in Asia: fraternity in human relations, in politics, in economics 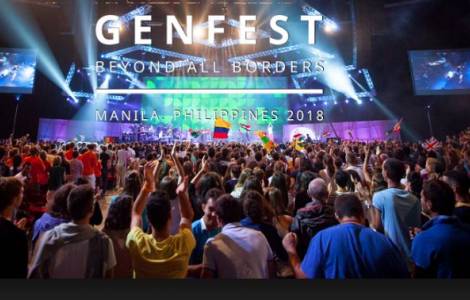 Manila (Agenzia Fides) - "Pathways to fraternity": is the project launched by over 6,000 young people who participated in the "Genfest", the international festival of the Focolare Youth Movement held in Manila. The project aims at "bringing individuals and peoples together so that they can contribute towards building fraternal relationships in the fields of economy, justice, politics, environment, intercultural and interreligious dialogue", says to Fides correspondent Stefania Tanesini.
The event, organized for the first time in Asia and outside Europe in Manila from 6 to 8 July, was the eleventh edition of the Genfest, and focused on the theme "Beyond all borders". The participants came from 100 countries around the world.
Generally held every 6 years, the Genfest is organized by the "Youth for a United World" (Y4UW), Focolare’s youth wing. Since its inception in Italy in 1973, the Genfest has become an avenue for young people to show that a united world is possible.
"At a time when migration increases and nationalisms gain ground, as a reaction to an exclusively economic globalization that ignores the diversities of individual cultures and religions,the Genfest has proposed to youth a change of attitude: do not stop at personal, social and political barriers but be ready to accept without fear or prejudice any sort of diversity", said Maria Voce, President of the Focolare Movement.
The Focolare youth will seek to generate a web of activities targeted at instilling a mentality and a practice of peace and solidarity in their own surroundings and in their countries.
The Genfest was a feast and a commitment at the same time. The message to "overcome borders" was passed on even through the artistic performances, as revealed by the two evening concerts that brought Asia to the rest of the world and vice versa. Many visited Explo, a multimedia and interactive exhibition that offered a different version of the world’s history based on humanity’s steps towards peace and the centrality of personal commitment to build it. The young participants were even offered the opportunity to “dirty their hands” by choosing to take part in “Hands for Humanity”: twelve activities of solidarity, encounter and urban redevelopment organized in different parts of Manila.
Stories related by young people, who live the drama of migration and segregation, were the highlights of this eleventh edition of Genfest. The stories related are of current significance, such as the one of Noé Herrera (Mexico) and Josef Capacio (USA). Both live very near to the border that separates their two countries. Egide and Jean Paul, one from Rwanda and the other from Burundi met during a very dramatic incident that divided the two countries.
Maria Voce proposed three words, that are also a life program for all the youth who now return to their countries: "love, start again and share". The appeal is "to love the peoples of other countries as you love your own people"; start again without ever losing hope that another world is possible and share personal and collective wealth, resourses and burdens. She concluded by challenging the young people to "be men and women of unity, people who cherish the treasures of every culture, but who even know how to give them to others, and ultimately be global men and women". (SD) (Agenzia Fides, 9/7/2018)

EUROPE/PORTUGAL - Day of migrants: it is possible to live reception