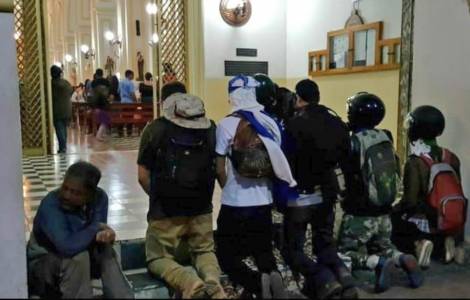 2020-03-30
The Church complies with anti-covid-19 standards, while the government promotes gatherings of people

Managua (Agenzia Fides) - More than 40 hours have passed since the pro-government forces arrived in Estelì to besiege the church of La Trinidad municipality, despite the complaints of priests and Bishops. "I condemn the attack in Estelì against the journalists of the Merced TV in the diocese of Matagalpa. My solidarity with Mgr. Alvarez and journalists. It is intolerable to attack freedom of press", wrote Mgr. Silvio Baez, Auxiliary of Managua, on twitter to inform about what was happening.
Cardinal Leopoldo Brenes, Archbishop of Managua, condemned the aggression against journalists and denounced the siege to the church: "From Estelí they tell me that the parish church La Candelaria, in the municipality of La Trinidad, Estelí, is surrounded by members of the national police and paramilitary groups, causing terror to priests and the faithful who are inside. I ask the national police to stop this action of disturbance and violence, so that the faithful can return to their homes", he wrote in a statement sent to Fides.
On Tuesday, July 3, about 40 trucks with riot gear and armed and hooded men arrived in La Trinidad, 124 km north of Managua, in the department of Estelí, where they dismantled a blockade organized by protesters on the international road and arrested several young people taking them away from their homes. According to the local press, a member of the government forces was killed, but the government only praised the reopening of the highway. Several demonstrators were seriously injured, according to human rights organizations.
According to Fides sources, the violence of government forces has begun to persecute local members of the Catholic Church. They target priests and seminarians, stopped on the streets with false pretexts to carry out checks. For the Bishop of the diocese of Matagalpa, Mgr. Rolando José Álvarez Lagos, the authorities accuse these people as if they were "a terrorist society". The fact remains that they have begun to bring young people to barracks and prisons without reason.
Yesterday in Managua, hundreds of Nicaraguans joined together to form a great human chain to ask President Daniel Ortega to resign and to have justice for the over 300 people killed in the protests. National Dialogue has resumed, but still awaits a response on fundamental issues from the government: to stop violence and call for early elections.
Nicaragua is going through the most serious socio-political crisis since the 1980s, which has so far caused more than 300 deaths and over 2,500 injuries, according to the Nicaraguan Association for Human Rights (ANPDH). The protests against the government began on April 18 (see Fides 28/04/2018) for the announced social security reforms, and later became a request for resignation of the President, in power for eleven years, accused of abuse and corruption . (CE) (Agenzia Fides, 5/07/2018)