ASIA/UZBEKISTAN - Shortage of priests, but enthusiasm and participation in the life of the Church increases 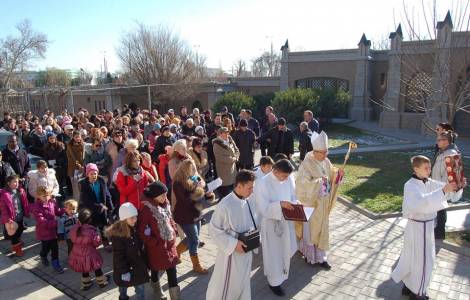 Tashkent (Agenzia Fides) - "The month of June was very intense, but at the same time exciting for the Uzbek Catholic community: in this period we celebrated the feast of St. Anthony and, in the same days, nine faithful received the sacrament of Confirmation. Finally, as every year, we experienced the 'Day of the Catholics of Uzbekistan', three days of prayer and catechesis which involved representatives of the parishes of the country. During all these experiences there was a great participation". This is what the Apostolic Administrator of Uzbekistan, Fr. Jerzy Maculewicz, OFM Conv tells Agenzia Fides. The "Day of the Uzbek Catholics", explains the Franciscan, had as its theme "Christian vocation" and was led by Fr. Andrzej Madej, OMI, Apostolic Administrator of Turkmenistan: "His catecheses and his homilies touched the hearts of the faithful. Many of them told me that this experience represented an opportunity for great growth for their faith", he notes.
The friar then explains that "every parish group had been asked to prepare theatrical representations on the life of some saints, chosen as leading figures of the day. This activity was appreciated especially by the youngest whowere able to deepen their ties, as well as the knowledge of the lives of the saints staged".
Summer will be a period of great travel for the few priests present in the area. Fr. Maculewicz explains: "In the summer months we do not foresee extraordinary activities, because we are experiencing a difficult moment: there are only 4 priests for 5 parishes. We can count, however, on the presence of a priest from Poland, who will help us for the next three months".
The five Uzbek parishes, which have a total of about 3,000 baptized, are distributed between Tashkent, Samarkand, Bukhara, Urgench and Fergana, the most important cities in the country. The Uzbek "missio sui iuris", which was established in 1997 by John Paul II, was elevated to Apostolic Administration by the Pope himself the day before his death.
In Uzbekistan, 80% of the population profess the Islamic religion, 8% are recognized in the Russian Orthodox Church, while other religious beliefs belong to minority groups. (LF) (Agenzia Fides, 27/6/2018)