AMERICA/ECUADOR - The Bishop of Esmeraldas is alarmed by the situation of young people:"Violence is the fruit of the tree of injustice" 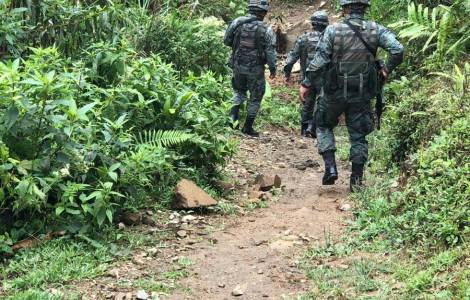 2020-06-06
Eucharistic Missionaries of Nazareth: 100 years proclaiming the Gospel among the poorest

2020-05-23
Bishops: the health crisis has highlighted the problems that the State has never faced and solved

Esmeraldas (Agenzia Fides) - It is time to think seriously about what is happening in the country, in particular the situation of violence that increases in the northern area, right at the border, where many young people are victims of this armed conflict in a war territory: this is what the Bishop of the diocese of Esmeraldas and President of the Episcopal Conference, Mgr. Eugenio Arellano says.
"Violence is a fruit that comes from the tree of injustice - said the Archbishop on Sunday, June 17 - no other tree gives that fruit, and the violence arises from injustice and abandonment from many governments
How many young people from Esmeraldas, from San Lorenzo, from Mataje, would like to have the economic possibilities of those living in the Huacho area, in order to help their own family! We have not been able to offer them anything else, but drug trade! We have always thought that they are negritos, part of folklore. The doors are always closed. There are some who after years and years of study and sacrifice, even after university, have to give in to corruption to have any kind of job! And we are silent, we all know! And this also makes us accomplices of this great social injustice! This is the injustice that weighs on the poor people of Esmerladas. All of this increases impunity.
We must do something!", concluded Mgr. Arellano, according to the text sent to Fides.
Yesterday, 18 June, Equatorian President Lenin Moreno warned that his country's security forces "will not allow Colombia's irregular armed groups to attack the sovereignty of Ecuador with actions on the border between the two nations, such as those that occurred in last weeks".
The President referred to armed attacks and explosives and even the abduction of civilians on the border with Colombia, which caused 7 deaths and about 40 people were wounded. According to a local source, these actions were attributed to the "Oliver Sinisterra" front, composed of dissidents of the now extinct guerrilla group of the Revolutionary Armed Forces of Colombia (FARC).
President Moreno said: "In today's Ecuador, no citizen of ours must live with fear, only criminals must fear, those who frighten the population, because we will pursue them without rest, do not doubt this". The President made these statements during a military ceremony in the province of Esmeraldas, where the government presented its defense, security and development policy for the northern border. (CE) (Agenzia Fides, 19/6/2018)