ASIA/AFGHANISTAN - A Barnabite: "The fatwa of the ulema against terrorism: historical step for the country" 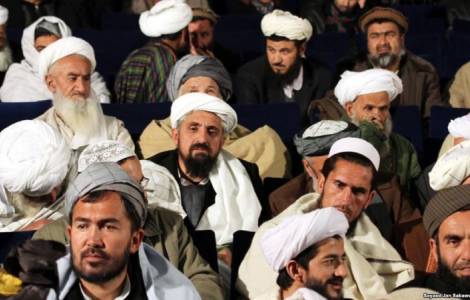 2020-12-22
The Scalese Barnabite: "The country is under the protection of the Virgin Mary who weaves the threads of peace"

2020-04-24
Widespread information to contain Covid-19: the contribution of civil society

2020-04-17
Political framework blocked due to Covid-19: further positive effects of the peace agreement

Kabul (Agenzia Fides) - "The attack against the Ulema Council is very serious. It is clear that those who carried it out are against the peace program proposed by these important religious figures. We are talking about a strong opposition: if we want to make a comparison, it is as if someone were killing Bishops because they say they are working for peace". This is what Barnabite father Giuseppe Moretti, a missionary in the Islamic Republic of Afghanistan from 1990 to 2015, tells Agenzia Fides, referring to the attack on June 4 in Kabul during a "loya jirga", the Grand Council of scholars of Islamic theology. Religious leaders, about two thousand, shortly before the attack had issued a fatwa (religious edict) against terrorism, considered as "haram", that is illegal and contrary to the Muslim religion, asking, at the same time, the Taliban movement to sit at the negotiating table for peace.
The terrorist act, according to a spokesman for the Kabul Police, killed 14 people and about 20 were injured and was claimed by the Islamic State, which called the meeting of the Council "a meeting of clerical tyrants".
"The Taliban would never have attacked a Council of such religious importance. Despite being extremists, they are Muslims and act according to a certain ethical code, however controversial. The Islamic State, on the other hand, only promotes extremism and the desire to destabilize. There is a lack of respect for the human being, whether religious or secular, be it a man, a woman or a child. This reveals a great existential void", emphasizes Fr. Moretti.
The Barnabite then focuses on the importance of the Great Council's stance: "It is the first time that a fatwa is issued against terrorism and civil war. It is a fundamental step in the history of Afghanistan, because it opens more than a glimmer of peace. I believe that the Taliban will reflect on this invitation, because it comes from prepared religious figures and in Afghanistan they are considered more authoritative than political leaders".
The Afghan population is 99.7% Muslim. Islam is a State religion, so no other religious exponent is allowed to carry out activities of proselytizing among Afghan citizens.
Today there is an Orthodox church in the Asian State, the only real Christian religious building on the whole Afghan territory. The Catholic presence, however, has its base within the Italian Embassy in Kabul: it was admitted in the early twentieth century as a simple spiritual assistance within the diplomatic structure and elevated to Missio sui iuris in 2002 by John Paul II.
In the Afghan capital there are also the sisters of Mother Teresa of Calcutta and the Pro Bambini inter-congregational Association of Kabul. Until 2016, the Little Sisters of Charles de Foucauld were also active. They arrived in Afghanistan in the 1950s. (LF) (Agenzia Fides, 7/6/2018)

AFRICA/DR CONGO - Islamist threat in Kivu and Mozambique: States in southern Africa should act together