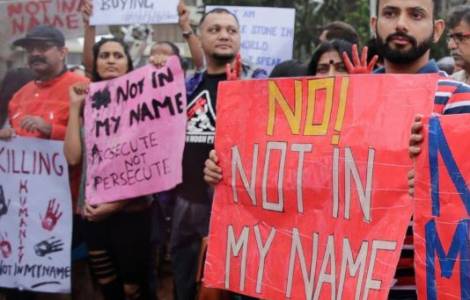 New Delhi - (Agenzia Fides) - During the four-year government (2014-2018) of Hindu nationalist party "Bharatiya Janata Party" (BJP), of Premier Narendra Modi, who led the government of the "National Development Alliance" (NDA), the Christian community in India faced unprecedented attacks, carried out by Hindu nationalist groups: this is what an independent study says, published by a forum of experts and civil society organizations engaged above all in social work with marginalized and vulnerable groups of the population (dalit, tribal, children, young people, women, disabled, unemployed). The forum is called Wada Na Todo Abhiyan (WNTA, "Campaign: Do not break the promise") and is a national civil society platform of more than 4,000 organizations and individuals. Its main focus is on the government's responsibility to eliminate poverty and social exclusion.
According to the detailed 140-page document sent to Agenzia Fides entitled "Citizens' Report on the Four Years of the NDA Government, 2014-18. Promises and Reality", the four-year period in question was painful for the Christian community, and 2017 and the first four months of 2018 were the most traumatic.
The Evangelical Fellowship of India, which monitors cases of violence, documented at least 351 cases of violence in 2017. And many times violence is not reported because the victim is terrorized or the police refuse to file a report. According to the data analysis of 2017, Tamil Nadu is the most hostile state, with the highest number of violence against Christians, with 52 cases, followed by Uttar Pradesh with 50, Chhattisgarh with 43, Madhya Pradesh with 36, Maharashtra with 38. Excluding Tamil Nadu, the other states are governed by the BJP directly or in coalition. The violence of Tamil Nadu is strictly linked to caste discrimination: the victims come largely from the so-called "lower castes" of the villages where dominant groups oppose the prayer groups in houses, typical of evangelical groups.
Even Christian children are among the victims. A group of Christian children who were traveling to attend a religious celebration was attacked by Hindu activists and were kidnapped. Terrifying aspects of this violence are rape, especially Catholic nuns, and other gender-based violence. At least three cases of rape were registered in the four-year period.
In the last four years there has been a growing tendency towards polarization, leading to social exclusion. In this context, the protests of Christian groups against "state violence" have been brutally repressed.
Governmental organizations, including the National Minorities Commission, have expressed their impotence. Many government structures and officials remain entangled in the bureaucracy or "are organs formed by politicians reluctant to take action in this sense", notes the document.
The Report also notes the presence of laws that generate discrimination and violence: the UN Special Rapporteur on Freedom of Religion and Belief of the UN Human Rights Council noted that Article 341, paragraph 3 of the Constitution, criminalizes the conversion of Indian citizens, the lowest caste, Christianity and Islam. There are punitive measures that deny the population of 180 million dalits access to employment in public administration and higher education institutions. The laws "on freedom of religion" present in seven Indian states "deny the rights and freedom of faith" or seem to give permission to strike Christians and their institutions.
The WNTA Report also investigates issues of development in the field of education, health, water and sanitation, land rights, economics, budgets, fiscal policies, civil society space, media, human rights, labor and employment, the environment, governance. The forum uses a network scattered throughout the Indian territory. (SD) (Agenzia Fides, 24/5/2018)