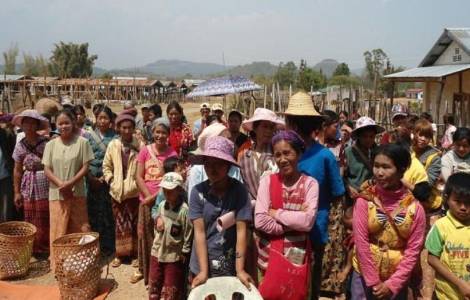 Yangon (Agenzia Fides) - Over 7,000 Christian citizens belonging to the Kachin ethnic minority, in northern Myanmar, have been forced to abandon their homes due to the escalation of violence between the Burmese army and the Kachin independentist rebels. This is what Bishop Francis Daw Tang confirms to Agenzia Fides, at the head of the diocese of Myitkyina, in the state of Kachin.
The Bishop explains: "In early April, the Burmese army began to attack the region on the border with China. Many villages were attacked and the population started to flee. Many have been trapped in the jungle for at least three weeks, without food and without freedom to move, because they are suspected of being rebel collaborators". "The refugees - he continues - have come to the parish of Tanghpre. At the moment there are 243 families in the parish territory, a total of 1,200 people. Another 600 displaced people have arrived in Palana, in a Baptist church complex, and other groups have found shelter in other churches", he says, noting that the Caritas of Myanmar is assisting them. Yesterday, another 400 displaced civilians arrived in the capital of Kachin, Myitkyina, where there were already over 4,000 other refugees.
On what is happening in the north of the country, political analyst Stella Naw notes: "It is a war where civilians are systematically victims of the Burmese military, while the international community ignores this emergency", and puts the crisis next to the one that touches the Rohingya Muslims.
"It is an invisible war", says Than Htoi, a Christian who is a social worker in the state of Kachin. Following a bombing, the Christian school complex, Kachin Baptist Mission School was destroyed on May 11, says Htoi highlighting "military attacks against civilian targets".
Yanghee Lee, UN envoy for human rights, in his March report to the Human Rights Council, called for an immediate end to the fighting, saying: "What we are seeing is unacceptable: innocent civilians are killed and injured and hundreds of families are fleeing to save their lives". (SD-PA) (Agenzia Fides, 17/5/2018)

AFRICA/DR CONGO - A Carmelite: "The Congolese Church plays a fundamental role in the pacification process of the Country"

ASIA/MYANMAR - Bishop Tjephe: "The Church has an important role in the peace process"