2020-10-05
Coronavirus pandemic: Procession in honor of the Señor de los Milagros canceled for the second time in its 300-year history

2020-09-16
The Bishops in the face of the health and social crisis: "Our commitment is the well-being of Peru"

2020-08-06
The bishops on the political crisis in the Country: "This is the worst time to cause a new crisis"

Lima (Agenzia Fides) - "Pope Francis knows the march for life very well, on two occasions he personally wrote to me, encouraging me and even advising me how to organize it, so if the maximum leader of the Church writes to a poor priest in South America, this gives me great peace and tranquility".
This is what Fr. Luis Gaspar, executive director for the "March for life" in Peru says to Agenzia Fides.
Since 2013, when the first March for life in the country was held, the Archbishopric of Lima entrusted Father Gaspar with the organization of the event, which has grown from year to year and gathered approximately 750 thousand people in 2016. Last year, the Cardinal Archbishop of Lima, Juan Luis Cipriani, took the decision to suspend the March in March 2017 because of the natural disasters caused by the phenomenon of El Niño in the north of the Peruvian coast, inviting everyone to lend themselves as volunteers to help in the affected areas. This year 2018, according to the organizers, the march under the motto "United for life" saw the participation of over 800 thousand people.
The event is usually held on 25 March, on the solemnity of the Lord's Annunciation, when the "Unborn Child Day" is celebrated in Peru, but this year the march was postponed to Saturday 5 May, in the afternoon, because as Cardinal Cipriani explained, "it seemed close to the Pope's visit to the Country", which took place from 18 to 21 January.
During the opening ceremony of the March, Fr. Gaspar read the greetings of Pope Francis encouraging all the organizers and participants: "May the joy that comes from the encounter with the risen Jesus Christ, the Lord of the history of every human being and source of true joy, become a missionary force that helps to arouse in everyone's hearts a greater commitment to the promotion and protection of human life, especially that of those helpless and marginalized brothers and sisters in society, remembering that it is the primary value and primordial right of every person".
At the end of the march, Cardinal Cipriani thus exhorted thousands of Peruvians gathered in the Costa Verde esplanade: "Let us not eradicate from this marvelous people this faith that is in everyone". The Pope told us: I see and touch your faith and I too see and touch this faith. Yes to life".
During the event it was announced that today, May 7, 10 essential measures to strengthen the family will be handed over to State authorities. (LG) (Agenzia Fides, 07/05/2018) 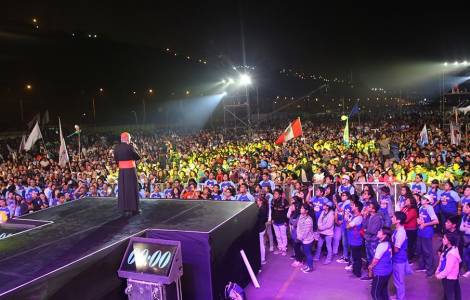 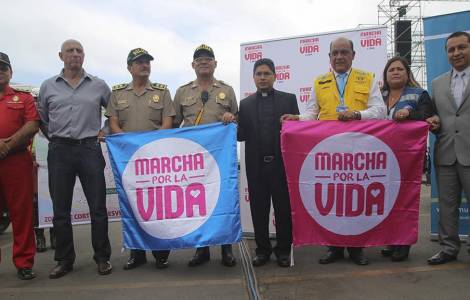