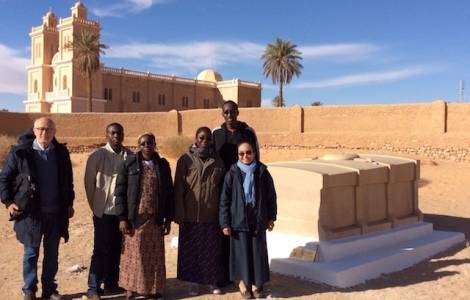 2021-04-10
Augustinian missionaries: "Restoring hope for the future to young people"

Ouargla (Agenzia Fides) – Precious volumes and photographs testifying to the history of the Christian presence, but also courses in English and French and Informatics: all this is found at the Cultural Centre of the White Fathers (Missionaries of Africa) in Ouargla, a city in eastern Algeria, a structure at the service of the local, mainly Muslim, community, in this city of the desert.
The Cultural Centre is an institution rooted in history. In 1875 the first White Father missionaries were sent here to find only a French military garrison and a handful of Berber hovels. Besides providing religious assistance for the soldiers, the White Fathers start to learn the local languages including the Berber dialect Mozabit. At the same time they collect ancient books, scrolls and take photographs.
As the years pass the missionaries catalogue the growing heritage which becomes a memory for the region and for the whole of Algeria. The photographs in particular bear witness to the different stages of a Christian presence which, in time, is ever more closely linked with the local population. “From the early years of colonisation down to our day - Fides was told by Fr. Aldo Giannasi, a White Father missionary who lived and served in Ouargla – the Algerians viewed the Church as a continuation of political and cultural invasion on the part of France. Today a change is taking place: now the majority of the priests and other church workers are from Black Africa, which clearly shows that the Church is not connected with France or with the West, or the powerful people of the world. She is Catholic, that is universal, and at the service of all”.
In the meantime, Ouargla too has changed. The military presidium is now an important Oil hub. The small village has become a city. The Cultural Centre still has its place in the qasbah. As the years passed the structure deteriorated. The windows and doors were old and the desert sand was beginning to penetrate the rooms. Shelves, tables, chairs were old and needed to be replaced. The White Fathers think of moving to the periphery. But then decide to stay in the original place and embark on its refurbishing .
Today the Centre hosts boys and girls, mostly Muslims, who study and use the library. Here they find a patrimony of books, history, geography, sociology, ethnology, religion and Christian spirituality. However the Centre has also becomes a focal point for the rest of the city because students find help with research and the local people take courses in French, English, Informatics . The Centre also hosts a Cine Forum focusing on scientific and social issues. “Our structure – concludes Fr Giannasi – bears witness to an active presence of Catholics at the service of Algeria, committed to a cultural mission which is a fruit-bearing seed of the Gospel” (EC) (Agenzia Fides 4/4/2018).

ASIA/MYANMAR - Franciscan appeal: "Now is the time for the international community to act in order to restore peace and democracy"