VATICAN - Condolences on behalf of the Missionary Dicastery for the sudden death of the Archbishop of Hochiminh-ville, Msgr. Paul Bui Van Doc 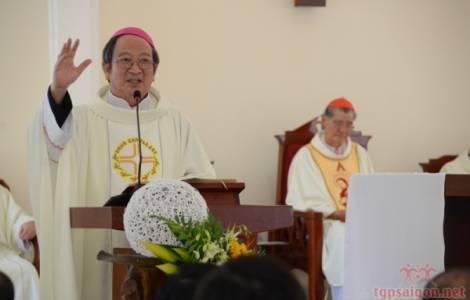 Vatican City (Agenzia Fides) - Cardinal Fernando Filoni, Prefect of the Congregation for the Evangelization of Peoples, together with Secretary, Archbishop Protase Rugambwa, and Adjunct Secretary and President of the Pontifical Mission Societies, His Exc. Giovanni Pietro Dal Toso, and Undersecretary Fr. Ryszard Szmydki, struck by the sudden death of the Archbishop of Hochiminh-ville, His Exc. Msgr. Paul Bui Van Doc, in Rome last night, express their sincere condolences to the Archbishop's family, to the entire Archdiocese of Hochiminh-ville and to the Vietnamese Episcopal Conference. The entire Missionary Dicastery and International Secretariats of the Pontifical Mission Societies join in prayer for the eternal rest of the soul of this wise and zealous Pastor and pray for those who are now in pain.
Msgr. Paul Bui Van Doc was in Rome together with other Vietnamese Bishops, for the Ad Limina Apostolorum visit in the Vatican, from 2 to 11 March. On March 5, the Bishops, including Msgr. Van Doc, had been received in audience by Pope Francis. Msgr. Paul Bui Van Doc suffered a stroke yesterday during a concelebration in the Basilica of Saint Paul outside the walls. He was urgently admitted to San Camillo hospital and died at 10.15 pm on 6 March.
He was born on November 11, 1944 in Dalat, province of Lam Dong, diocese of Dalat (Vietnam). In 1956 he began his studies in the minor Seminary in Saigon, then went to the major Seminary in 1963, and was later sent to Rome, at the Urbano College. From 1964 to 1970 he then continued his studies in philosophy and theology at the Pontifical Urbaniana University, and earned a licentiate in the two disciplines. He was ordained a priest on December 17, 1970. After his ordination he was a professor at the minor seminary of Dalat and the major seminary. In 1975 he was appointed parish priest and responsible for the formation of the major seminarians scattered throughout the diocese. In 1994 he was appointed Vicar General of the Diocese of Dalat. On the occasion of the Synod of Bishops for Asia (1998) he was appointed as "expert" by the Bishops of Vietnam. Pope John Paul II appointed him Bishop of My Tho on March 26, 1999, and was consecrated on 20 May the same year. On September 28, 2013, Pope Francis appointed him Coadjutor Archbishop of Hôchiminh-ville and at the same time Apostolic Administrator sede vacante et ad nutum Sanctae Sedis of the diocese of My Tho. On 22 March 2014, after the resignation of the pastoral care of the Archdiocese of Hôchiminh-ville presented by Cardinal Jean-Baptiste Pham Minh Mân, he succeeded him as Ordinary of the same Archdiocese. (SL) (Agenzia Fides, 7/3/2018)