AFRICA/LIBERIA - The new president is by young people’s side: Street children see hope for their future 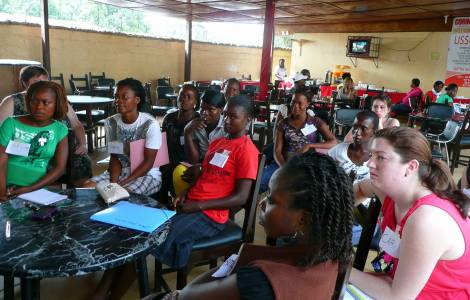 2018-06-06
Bishop Borwah: "Let's give President Weah time to act because the challenges are immense"

2018-03-14
A future of peace and prosperity for the country, also thanks to religious institutions

2018-03-02
The new president is by young people’s side: Street children see hope for their future

2017-10-10
Presidential elections: "A democratic turning point, but people are waiting for development" says a missionary

Monrovia (Agenzia Fides) - The long period of political unrest and uncertainties, civil, religious and ethnic crisis that led to the expulsion of thousands of Liberians outside the Country has long broken young people’s dream of freedom. Now, thanks to the recent peaceful political transition, on January 22, 2018 former football champion George M. Weah was elected President of the Republic: a dream has been rekindled and young people have new goals and challenges. This is what Fr. Firmin Kouassi, priest of the Society of African Missions, coordinator of the "Justice and Peace" Commission in his congregation in Liberia explains to Agenzia Fides: "President Weah's campaign was predominantly oriented towards young people and aroused new hope in many citizens, especially the 'zogos', street children. Weah visited them, spoke their language, colloquial English or "pidgin"; he sat with them and ate with them, he promised to be their friend because he understood their sufferings. He became one of them". He understood that the attitude of young people towards society could change only if society changes with them. Young Liberians wanted someone who could consider them and respect them as human beings. This new impact is giving that lost dream of freedom back to the country, enshrined in the Declaration of Independence signed in Monrovia on July 26, 1847".
During his first speech to the Nation, the newly elected president invited the Senate to consider the possibility of establishing "dual citizenship". Many Liberians, in fact, live abroad, have a good education and are well integrated in other Countries. The idea could favor the return of many and contribute to the construction of the Country. Thanks to the recent elections of President George Weah and the peaceful transition monitored by his predecessor Helen Johnson Sirleaf, Liberia is ready to walk towards the future.
The Liberian population is very young. The average age is 18.3 and the fertility rate is about 5 children per woman. More than 60% of the population is under 25, 43.8% is in the 0-14 age range. The Country currently has 4.8 million inhabitants, 16 indigenous ethnic groups and various minorities (Americo-Liberians, Congo, Lebanese, Indians and some West African citizens). Indigenous groups represent 95% of the population.
Many former rebel fighters are still in the streets, they received a few dollars in exchange for disarmament and found themselves forced to beg. Most of them use drugs: they pose a security threat and are groups easy to manipulate. The current statistics record about 50 thousand drug addicts in Monrovia.
Fr. Firmin Kouassi concludes: "The daily goal of many young people is to find food to feed themselves. Many live in the moment and if they can leave the Country they do not hesitate to do so, even if they end up in refugee camps. Non-governmental organizations, as well as the international community and various religious institutes, have played an important role in the reconstruction of the Country, but at the same time with their presence they have fostered a 'culture of dependence'.
Those born in refugee camps find it difficult to earn a living by working. There is no real sense of belonging, people so far have not participated in the development and protection of their Country. Young people want to return to be protagonists of the development and the future of the nation in the new political and social phase". (FK/AP) (Agenzia Fides, 2/3/2018) 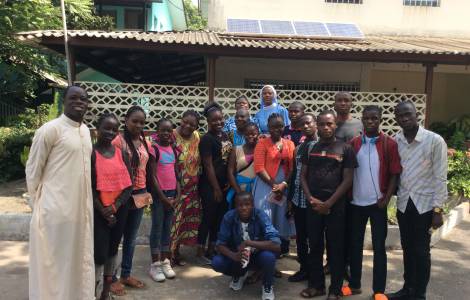