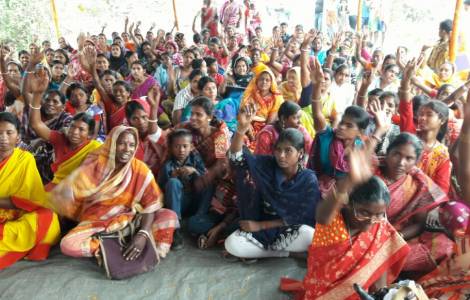 2020-01-08
Christian leaders in the ruling party: the new citizenship law is not inclusive and needs to be expanded

2019-12-18
Missionary Church's commitment to those affected by leprosy

2019-12-17
The new law on citizenship to immigrants "is unconstitutional": appeal to "civil disobedience"

New Delhi (Agenzia Fides) - "Dalit women in India are poorer, more marginalized and discriminated than men, and the average age of their mortality is 14.6 years lower than the highest caste women. The data of the new UN Report are alarming", says to Agenzia Fides Fr. A. Singarayan, Catholic priest of Tamil Nadu. The priest refers to the UN report titled "Turning promises into action: gender equality in the 20130 agenda", a recent study that highlights the increase of mortality concerning lower caste women in India, mainly due to poor health and hygiene conditions.
"Women must have equal rights and opportunities. God created mankind in his own image; he created him in the image of God, but it is sad to know that little girls are not treated with the same attention as boys in India", observes the priest. "In Indian society - he continues - women and girls experience multiple forms of disadvantage based on gender and other inequalities", which translates into "lack of access to quality education, decent work, health and well-being".
At the heart of the UN 2030 Agenda for Sustainable Development - adopted two years ago by the UN - there is a commitment to "leave no one behind", giving priority to the needs of the most disadvantaged groups. The agenda sets a series of global benchmarks, such as: eradication of extreme poverty and hunger, access for all children to school education. The new UN Report highlights how women are particularly affected by these emergencies and examines the policies needed to achieve the stated goals.
The goal is to ensure that all women and girls, regardless of their age, class, race, ethnicity or religion, enjoy equal rights and opportunities. According to the Report, the intersection of gender-related discrimination with other forms of discrimination - caste, ethnicity, religion - further marginalizes the women and girls of the poorest and most disadvantaged groups.
Poverty, therefore, has other consequences in India: for example, it often leads to lack of access to education, child labor and child marriage.
According to the UN Report, a woman aged between 20 and 24 in India, from a poor family in a rural area, is five times more likely than a wealthy urban family to marry prematurely, before 18 years of age.
The Report invites governments to develop policies with the objective of "leaving no one behind", so as not to further aggravate social fragmentation.
"Do not leave anyone behind - concludes Fr. A. Singarayan - means accepting and satisfying the needs of the most marginalized, those who are disadvantaged at a social, political, economic, environmental, cultural level: here is where the Church is committed in India, and this is where the government must commit itself". (PN) (Agenzia Fides, 22/2/2018)

AFRICA/IVORY COAST - Diocesan pilgrimage: women of the Catholic Church join forces to pray for peace in the Country