AMERICA/CHILE - Isolde Reuque: "The Pope recognizes the suffering of the Mapuche and confirms them in the faith" 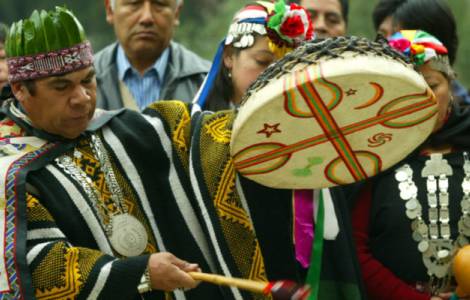 2020-07-15
On the journey with the Virgin of Carmen, united to build a more just and supportive society

Temuco (Chile) - "The Pope immediately started his speech in Mapudungun (the language of the Mapuche): 'Mari Mari. Küme tünngün ta niemün ', that is 'Good morning. Peace be with you'. And he thanked God for allowing him to be in the Mapuche territory, in Araucania", underlines with pride, in a conversation with Agenzia Fides, Rosa Isolde Reuque, responsible for the Mapuche pastoral care of the Chilean diocese of Temuco. "The Holy Father recognized the existence of the Araucanía and the legitimacy of the Mapuche claims. He also explicitly pointed out during the Mass, at the Maqueue air base, that serious human rights violations have occurred", referring to the torture of the Pinochet regime and asked for a moment of silence. "We offer this mass for all those who suffered and died, and for those who daily bear the burden of those many injustices", he said, emphasizing the richness of differences, of multiculturalism and of the need for dialogue that "passes through the recognition of the value and rights of the original peoples, who he named one by one", recalls Reuque. Isolde is particularly touched by the clear condemnation of violence and injustice and tells Fides: "In recent months I traveled the countryside, villages and parishes to invite my Mapuche brothers to the meeting with the Pope, and to see so many people rejoice with him was very moving. He has not only confirmed us in the faith. The fact that the Mapuche went before the altar three times was very important and significant".
"There is no incompatibility between the Mapuche spirituality and the Catholic religion" explains the woman, noting that the indigenous "worship the only one God the Creator, giver of all good". During the first moment of active involvement of the Mapuche a large group of indigenous sang and recited the "Lord, have mercy". The Mapuche - explains Reuque - do so by "asking the Creator’s permission to be there, in his presence, on the territory that is ours but is first of all his". Then they thanked God for the Pope's presence and prayed to God for the gift of water: "They talked about rain, of course, but that alone is not enough. One of their complaints concerns the forest model based on the planting of eucalyptus for the production of paper that, in addition to impoverishing the land, it also impoverishes groundwater", she explains. Very positive, she told Fides, the Pope's private lunch with 11 representatives of the Araucanía and with the Bishop of Temuco. The Mapuche "felt supported by the Pope: the pope gave us the opportunity to tell the world our story. This will be important in the good and nonviolent struggle against injustice, for their land, and for a model of eco-sustainable development", concludes Reuque. (SM) (Agenzia Fides, 18/01/2018)