AFRICA/DR CONGO - The frank and explicit political commitment of Christians: a prophetic voice in society 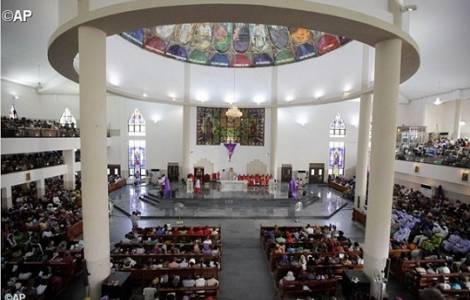 Saoudè (Agenzia Fides) - "The Christians of the Democratic Republic of Congo, led by the Congolese Episcopate, will continue to surprise the world, and Africa in particular, for their explicit and frank political commitment. Never in the history of our African Churches have Christians been so determined to say prophetically "No" to politics for its mortal selfishness". This is what, in an interview with Agenzia Fides, Fr. Donald Zagore, SMA (Society for African Missions), Ivorian writer and theologian currently in Saoudè (Togo) says, reflecting on the initiatives and activities of Catholics in Congo, projected towards a renewal of African Christianity.
The priest observes: "The Christians of Congo are writing a new page in the history of African Christianity. A Christianity that now refuses to be locked up in the sacristy; that refuses to be an accomplice of politics breaking the silence so that death is not the last word; that embraces martyrdom in defense of justice and truth; a Christianity that claims to be prophetic while remaining for the poor and with the poor, the only flame that still shines in the depths of darkness; a Christianity that renounces its comfort, which accepts to get its hands dirty".
"Fighting for freedom, truth and justice is now an act of salvation as well as a fundamental vocation of every man and every Christian in particular. It is time for our ecclesial communities to make themselves heard, guided by Pastors who are prophets, who do not fear defiling the whiteness of their tunics with the blood of the struggle for an Africa where life is preferred to death, love to hatred, peace to war", continues Fr. Donald.
Commenting on the appeal of the Congolese Bishops on secularism, the priest reports: "The crisis in Congo Kinshasa, where Catholic bishops once again openly asked to stop any political imposture, reemerges from the thorny question of the apolitical nature of religious in the face of secular nature of State religion".
"African man is religious by nature, says John M'biti. Which means that it would be illusory, even utopian, to claim to build a socio-political universe in Africa, wanting at all costs to suffocate the voice of the religious. Religion occupies a prominent place in the daily life of African man. A reality that imposes itself on politics", observes the missionary.
"When we speak of secular State, we simply mean a legal structure that, in principle, should allow everyone, believers and non-believers, to live together. A cohabitation that has its source and is rooted in the fundamental values of justice, truth and democracy. When in a State, these fundamental values of justice, truth and democracy, which must constitute the structure of living together, are trampled by a policy devoid of all human morality and dignity, the religious cannot in any case fail in their prophetic mission" .
Therefore - concludes Fr. Zagore - the appeal of the Congolese Bishops is in no way "an attack on the principle of secularism of the Congolese State, but a prophetic act that wants to fight against all these forces the dictatorship of the power of politics". (DZ/AP) (Agenzia Fides, 17/1/2018)