AMERICA/PERU - Puerto Maldonado, a historic meeting that will give more visibility to the natives of the Amazon 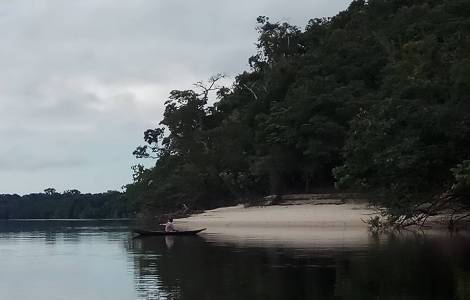 Puerto Maldonado (Agenzia Fides) - Pope Francis has always had special attention and affection towards the Amazon and its inhabitants, especially the native peoples. The encyclical Laudato Sì or the creation of the Panamanian Ecclesial Network are examples of this attitude.
Puerto Maldonado promises to be, as Hector Sueyo Yumbuyo, indigenous leader of the Harakbut people of Madre de Dios confirmed to Agenzia Fides, "a historic meeting", a demonstration that the natives are "supported by the Catholic Church through its highest authority, Pope Francis, a spiritual support to all the activities that the indigenous people carry out to survive and face problems, such as the demolition of trees, illegal mining and social problems that this activity generates".
The indigenous leader of the region who will be visited by the Pope, continues to explain that he sees in the journey a "recognition of the evangelizing work of the Apostolic Vicariate of Puerto Maldonado", initiated in 1920 by a missionary whom the Indians knew as Apantonek, Papá Viejo. Some of the wisemen with whom he lived will perform a welcome ritual chant of the Harakbut People.
In this same sense, also Julio Cusurichi Palacios, president of the Federation of the natives of Madre de Dios, awarded with the Goldman Environmental Prize in 2007, emphasizes to Fides the singular importance of the meeting, in which "the lack of legal security of the territories must be highlighted, making known the danger of some rules that the Peruvian Congress is adopting, such as road projects that would pass through the indigenous territories of isolated peoples or protected natural areas". According to Cusurichi, it will be a moment to make "the great contribution that indigenous populations give to forest conservation visible and which help mitigate major environmental problems". Despite this contribution, he continues to explain,"we are hardly recognized, benefits do not reach indigenous peoples, they remain at an environmental or governmental institutions level".
Julio Cusurichi sees in the meeting an opportunity for "the Pope to insist that governments assume their responsibilities and work on public policies to include the demands of the indigenous peoples, so that governments can reach their social inclusion". "The Pope will strengthen unity among all the indigenous peoples and commit the Peruvian state so that it can meet the needs of the territory, the economy and the organization", concludes Hector Sueyo, and reiterates that this "is an opportunity to make the problems of the indigenous people of the Amazon, as well as cultural wealth, ancestral knowledge visible, so that the state can recognize them as a cultural heritage of the nation and safeguard future generations". (LMM) (Agenzia Fides, 15/01/2018)