ASIA/TAJIKISTAN - The new year dedicated to evangelization and charity 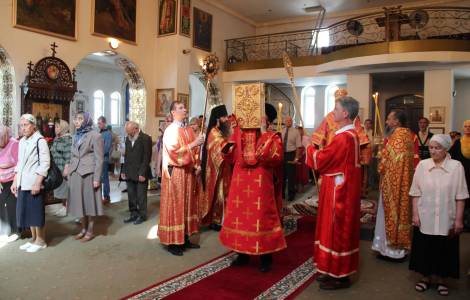 Dushanbe (Agenzia Fides) - "In 2018, with the help of God, we hope to extend our presence in other cities of Tajikistan and to undertake new charitable projects in favor of the population". This is what Fr. Pedro Ramiro López, a priest of the Institute of the Incarnate Word, responsible for the Missio sui iuris of Tajikistan since 2013, but on a mission in the state of Central Asia since 2004, tells Agenzia Fides.
"Let us begin the new year in a strong manner thanks to what we received during the Christmas period: a time of grace, rooted in the Eucharist and characterized by meetings with the families of the parish", explains Fr. Ramiro López. "We tried to guarantee the liturgical celebrations for all the linguistic communities present in this country. On December 24, there was a mass in English for foreigners and for the diplomatic corps in the capital Dushambe, and another in Russian for the rest of the faithful. At the same time, the Vigil Mass was celebrated in the church of Qurǧonteppa, a city about 100 kilometers from the capital. In addition, given the presence of a group of Italians who are working to build a dam, on Christmas Day my confreres and I went to a place two hours from the capital to live the Eucharist in their language. And in the days following Christmas we celebrated daily mass with our entire parish community".
Particular attention was given to the families and children of the parish of Dushambe: "Throughout Advent, we visited the faithful, bringing them an icon of the Little Child and blessing their homes, where the image of Jesus remained for some days before being brought to other homes. With the same families, we lived two more beautiful moments: the living representation of the Nativity, made by the children of the oratory, and the day of retreat on the occasion of the Feast of the Holy Family".
2017 was a particularly important year for the Tajik Church, which experienced the twentieth anniversary of its rebirth, after the Soviet period: it was, in fact, 1997 when John Paul II established the Missio sui iuris, entrusted to the priests of the Institute of the Incarnate Word. "We celebrated this moment with the right solemnity, in the presence of the Apostolic Nuncio, of the general superiors of our order and a multitude of faithful, religious and priests who over the years have provided their service", says Fr. Pedro Ramiro López.
The Tajik Church, as reported by the priest, now has about 150 faithful, assisted by 3 Argentine priests of the Institute of the Incarnate Word, 5 Missionary Sisters of Charity and 3 religious women of the Institute of Servants of the Lord and of the Virgin of Matarà. (LF) (Agenzia Fides, 11/1/2018)

ASIA/IRAQ - Patriarch Sako: elections at risk of boycott, even Christians could desert the polls

AMERICA/PARAGUAY- The Bishops: "With Christ we must be medicine in this time of the pandemic and post-pandemic"

ASIA/LEBANON - Maronite Patriarch: "May the Lord end the pandemic with the power of his resurrection"

ASIA/THAILAND - Evangelization and dialogue with Buddhists in the north of the country, for the common good

ASIA/MYANMAR - The Administrator of the diocese of Loikaw: the third wave of the pandemic overlaps political and social crisis

AFRICA/EGYPT - Luxor hospital asks Egyptian Christians to give their 'tithe'