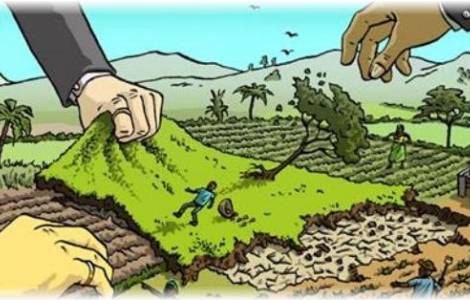 Accra (Agenzia Fides) - "Indeed, I share with Caritas the view that land plays a critical and fundamental role in the social-economic development of any country, hence our heavy dependency on it for our livelihood", said John Peter Amewu, Minister for Land Natural Resources of Ghana intervening in a seminar organized by Caritas Ghana on land grabbing.
He made this observation at the two-day Annual Learning and Review Meeting on Land Grabbing at the National Catholic Secretariat in Accra, where he hinted that the current government was poised in tackling grabbing issues confronting Ghana. The meeting organized by Caritas Ghana was attended by Traditional rulers, Politician’s and Policy Makers, Clergy and religious, Technocrats, civil society, faith based groups and leaders of Babattor Community, one of the affected communities of land grabbing.
Mr. Samuel Zan Akologo, Executive Secretary, Caritas Ghana, said caritas principal aim for the meeting was to demand policy attention for issues that are critical factors in the economic and livelihood condition of the rural poor.
"Demanding policy accountability, we are also doing policy education that will allow citizens; especially communities to understand what avenues are available to them when their interest is under threat".
Very Rev. Fr. Lazarus Anondee, Secretary General of the National Catholic Secretariat, on behalf of the Ghana Catholic Bishops’ Conference said the Bishops’ are happy that Caritas Ghana is engaging actively with both state and non-state actors for the promotion of the common good, championing the voice of the poor and marginalized in our society.
He further observed that the Bishops raised concern about land grabbing in its 2016 communiqué issued in Tamale after its plenary assembly. They requested that development partners pay attention to land grabbing so that the livelihoods of rural communities are not undermined.
"Poverty can affect family life; including stress in marriages. For this reason the church will continue to do all in her power to speak for these families and communities who may not be able to have their voices heard at the appropriate level of State Authority", said Fr. Anondee.
The Queen Mother of the Bole Traditional Area Kansawurcha V.A. Bukari led a delegation of Imam, Assembly man and a citizen of the town to narrate the ordeal of Babattor, a farming community in the Bole district of the Northern Region of Ghana at the gathering, where Agricultural development company have acquired a large tract of land 25,621.86 acres.
The Queen Mother said that the company promised them improved local Schools, clinics, make mend the road from Babattor to Bambio, release some of the lands to the community members who will like to work on their own and employ the citizens to work in the company among others. She added that the company had paid some traditional leaders and the local district Assembly, who did not inform the inhabitants of the area of purchase
The Assembly Man for the Babattor electoral area, Mr. Akose Bakoji Mahamadu said the community was not involved in the land acquisition processes and are now slaves in their own lands. (A.A.) (L.M.) (Agenzia Fides 22/12/2017)

AMERICA/ARGENTINA - Bishops: "The Church does not approve the invasion of lands"