VATICAN - Archbishop Dal Toso: "Mission is the thermometer of the Church" 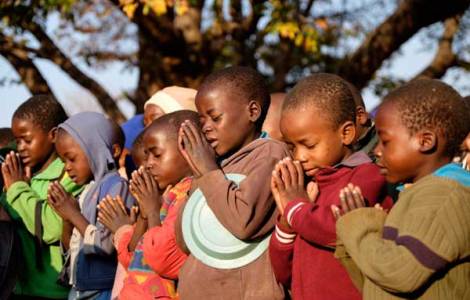 2020-07-03
The PMS Fund for the Covid emergency has sent aid to the dioceses of Benin, Madagascar, Senegal

Vatican City (Agenzia Fides) - "When announcing the Kingdom of God, Jesus recalls that the Kingdom belongs to God: as Benedict XVI observes in his trilogy about Jesus, it is about a subjective genitive. The Kingdom does not belong to man or to the Church, which is also an effective sign of the Kingdom. It is God who moves the hearts to the mission to donate the Gospel. The Holy Spirit aroused the ardor of many missionaries in the history of the Church and still acts today: the more we nurture the belonging to Christ, the more the forces to announce the Good News are born": says in an interview with Agenzia Fides Archbishop Giampietro Dal Toso, appointed by Pope Francis, President of the Pontifical Mission Societies. On the eve of his episcopal ordination, to be held in St. Peter's on December 16th, Agenzia Fides asked him some questions.

Excellency, with what spirit and what wishes does your service as President of the Pontifical Mission Societies begin?

I am very grateful to Pope Francis for entrusting me with this responsibility that I live with great enthusiasm. I am happy because the mission is very important to me. In the past I had the opportunity to get to know some territories under the jurisdiction of Propaganda Fide but, beyond that, I believe that the mission is in some way the thermometer of the situation of the Church. The idea of being able to contribute to animating the missionary dimension of the Church is a great privilege for me.

Can you tell us about your experience of "mission territories"?

In the past I worked for the Pontifical Council "Cor Unum", and this brought me in contact with many difficult situations all over the world. In the last period I dealt, in particular, with the Middle East and Sahel, a crucial area from a political, humanitarian and religious point of view for Africa. Another channel that allowed me to enter the "missionary world" was the Caritas Internationalis network, which is important to get to know the local ecclesial realities, especially in Africa and Asia, approaching them from the "humanitarian side".

Now with the Pontifical Mission Societies, you will appreciate them from another side ...

The Pontifical Mission Societies (PMS) have a very important value for two reasons: first of all they give the young churches the chance to structure themselves, to give themselves a configuration, a backbone, financing seminaries, churches and study courses. This represents, for a community, a valid help to stabilize. A second task is that of missionary animation: financial help makes sense only if it is considered within a general vision that is the desire to bring the Gospel. When they were born in France in the nineteenth century, the original idea of the Missionary Societies was to awaken the missionary spirit in every baptized person; then the economic support to the missions followed. The PMS today are called to keep these two aspects alive and are therefore very current.

We are heading towards the extraordinary missionary Month announced by the Pope for October 2019: what are the objectives and perspectives for this event?

I am convinced that the extraordinary missionary Month represents a great opportunity for the whole Church; and I wish that in this time we can dedicate ourselves, in the forms that are being studied, to prepare this event at a universal level, a precious occasion to revive the missionary spirit: this is how the Pope wanted it and this is how we will live it. We are in the preparatory phase, and it is desirable that it should not be perceived as a "centralist initiative" but for local Churches to be involved: the mission is crucial for the whole Church, certainly not a theme for a few specialists. The extraordinary missionary month implies the involvement of all the faithful. With the same spirit World Missionary Day was born, to underline that the mission is a call that belongs to all the people of God and that every baptized person is responsible.

How do you interpret the concept of "mission" today, at the time of Pope Francis? With which special emphases and peculiarities?

The meaning of "mission" is pregnant and has had its evolution: I live it and interpret it, with Pope Francis, with the idea of the lost sheep. The Pope asks us to be Pastors. This is the mission today: we are called to go looking for the lost sheep. The "Church that goes forth" takes the initiative to look for those who are far from God and in their hearts perceive a gap to be filled. The image of the lost sheep is useful because a sheep needs pasture, otherwise it does not survive. So today's man needs to find the pasture that is God, his Word, the Sacraments, otherwise he does not survive, even if he believes he can do it. For this reason, as the Council says, the missio ad gentes is still valid today because there are people and populations who do not yet know Jesus Christ. But this is also valid in the regions where the Gospel is already present. The testimony of Jesus’ Easter is true proclamation and offering of new, divine and eternal life for all.

The mission is not the result of human effort ...

When Jesus announces the Kingdom of God, he recalls that the Kingdom belongs to God: as Benedict XVI observes in his trilogy about Jesus, it is a subjective genitive. The Kingdom does not belong to man or to the Church, which is also an effective sign of the Kingdom, as the Council says. It is God who moves the hearts to the mission to donate the Gospel. The Holy Spirit has aroused the ardor of many missionaries in the history of the Church and still acts today: the more we nurture the belonging to Christ, the more the forces to announce the Good News are born. For many centuries we have seen missionaries depart for unknown lands, sometimes without knowing what they were about to face or putting their lives in danger. The Holy Spirit aroused in them the desire to be witnesses and proclaimers of the Gospel. This is the key to the awakening of a missionary conscience: the proclamation of the Gospel is an action of the Holy Spirit. If the Church lets herself be animated by the Holy Spirit, this allows the Gospel to be spread. The Pope uses the term "primear" to reaffirm the primacy of God: the Kingdom belongs to Him, who gives the grace to announce it.

Are there saints or missionaries who will be your source of inspiration?

I would like to mention an episode and two saints. A few years ago I visited the abbey of Keur Moussa in Senegal, founded by the French Benedictines at the beginning of the 20th century. In the cemetery there were the graves of monks, all between 30 and 35 years of age, who left France knowing that they probably would have lived a few years in that country: but they had something bigger than their own life in their heart and they are an example of who gives life to serve Christ. Among the saints I would like to quote Francis of Assisi, who went to Egypt without fear, with simplicity, to present his faith to the Sultan, giving the peace of Christ. I also carry a missionary from my diocese of Bolzano-Bressanone in my heart, Giuseppe Freinademetz, one of the first verbites: he was a missionary in China, where he died and was appreciated by the Chinese for his example of life. Born in a wonderful environmental context, he had a fire within him that led him to go further. Freinademetz helps us understand that the treasure of faith is too big to be kept just for us. (PA) (Agenzia Fides, 15/12/2017)

AMERICA/VENEZUELA - Towards the Youth Missionary Congress and Missionary month of October, despite the crisis

AMERICA/VENEZUELA - Towards the Youth Missionary Congress and Missionary month of October, despite the crisis