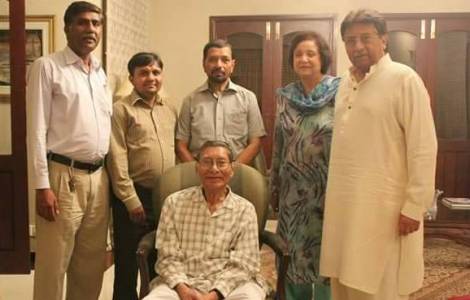 Karachi (Agenzia Fides) – An emotional crowd of priests, religious and faithful, hundreds of former students, many of whom Hindus and Muslims, attended the funeral mass held yesterday, December 6, in the Cathedral of Saint Patrick in Karachi, to accompany and pay the last respects to Fr. John Baptist Todd OFM, a well-known Pakistani priest and Franciscan educator of Karachi. Fr. Todd died at the Hospital of the Holy Family on December 4, at the age of 96, after seventy years of priesthood.
Archbishop Joseph Coutts, at the head of the community of Karachi, presided the funeral mass, concelebrated by Mgr. Samson Shukardin OFM, Bishop of Hyderabad, also a minor friar. The latter thus recalled his confrere: "He was a man of strong principles, strict with his students but also very affectionate towards each of them. He will be remembered as a man of prayer, for his disciplined life, for the service rendered to education in Pakistan", he added.
Fr. Todd, who was the first Pakistani minor friar, served the nation for sixty years as a pedagogue and teacher. Former president and head of the Pakistani army Pervez Musharraf and Jam Sadiq, former president of the province of Sindh were among his students. They both expressed great appreciation for Fr. Todd’s work. Even today, many of his former students serve in key positions in society and politics, in the armed forces.
Fr. Todd was born on November 30, 1921 in Karachi and, after his university studies, he joined the Order of Friars Minor. After his priestly ordination, in 1948, he served in St Patrick High School in Karachi, then as vice headmaster and headmaster of San Bonaventura High School in Hyderabad, until 1978. After a period in Quetta, (where he was a victim of an attempted murder) he returned to the Archdiocese of Karachi, again in St. Patrick high school, where he was Director of the technical institute.
Friar minor Pascal Robert, a former student, tells Fides: "Throughout his life he taught us the adherence and the strong bond with God, true and unique Master of our lives. The Rosary and daily prayer were always the source of his strength to fulfill his responsibilities with dedication and missionary zeal". (AG-PA) (Agenzia Fides, 07/12/2017)