ASIA/MYANMAR - Religions give a valuable contribution to peace: with the prayer of the cloistered nuns 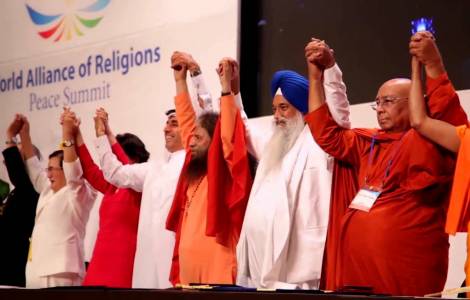 Yangon (Agenzia Fides) - Interreligious dialogue is a launched and functional reality in Myanmar and there are good relations among leaders of different communities of faith. "These factors actively promote social harmony and peace, with a concrete impact on the social dynamics of reconciliation among different ethnic and religious groups", explains to Agenzia Fides Luigi De Salvia, Secretary General of “Religions for Peace” (RfP), an international organization that is deeply rooted and developed in Myanmar, promoter of interreligious dialogue as a tool for defeating conflict and building justice and peace in the world.
Commenting on the first days of Pope Francis in Burma, after the private meeting with religious leaders and that between the Pope and the Supreme Buddhist Council of “Sangha”, De Salvia says: "In Burma, the Religions for Peace section has a council of presidents including Sitagu Sayadaw, influential Buddhist leader whom the Pope met, Cardinal Charles Bo, an Islamic mufti and a Hindu leader: the interreligious initiative is therefore supported by the most important communities of faith in the country and contributes to the realization of programs of dialogue and mutual knowledge as well as common social assistance projects that help develop harmony and collaboration among Burmese faithful of all religions".
The Secretary of RfP, who has several times met with Burmese representatives, explains that "with regards to the Muslim Rohingya issue, the religious element has been instrumentalized, raising the specter of political Islam. And the presence of a Muslim armed group certainly contributes to raising in the Burmese the defense of the cultural and prevailing religion, Buddhism, identity. The action of some nationalist Buddhist monks such as Ashin Wirathu, who have contributed to provoking anti-Islamic sentiments in the population can be attributed to this dynamic of identity defense. It must be said that political and economic factors are not alien to this, which have made the role and Aun San Suu Kyi's position very delicate and difficult.
It is the dynamic of the relationship, always difficult and asymmetrical, between majority and minority, which is also found in other contexts", observes De Salvia.
In any case, "the strength of dialogue and good relations among religious leaders is a fundamental component recognized by everyone, including politics, to effectively promote national reconciliation, that the presence of Pope Francis can help build", he notes.
This reconciliation, which is "the greatest good", concludes De Salvia, "today in Burma is supported and sustained spiritually by the Benedictine cloistered nuns of the monastery of Santa Cecilia in Rome: on the proposal of Religions for Peace, the cloistered nuns, at the beginning of each lunar month (according to the Buddhist calendar), pray specifically for peace, harmony and reconciliation in Myanmar; and these days they have done it in a special way to support the mission of Pope Francis, who they always entrust to the Most High, so that every step of his life is guided by the grace of God. Their prayer and their life is today the confirmation of the deep bond between cloister and mission". (PA) (Agenzia Fides, 29/11/2017)

VATICAN - Pope Francis: May Pauline Jaricot's example arouse in everyone the desire to participate in spreading the Gospel in the world