ASIA/MYANMAR - Pope Francis to the Burmese authorities: healing the wounds of the Country is a "political priority" 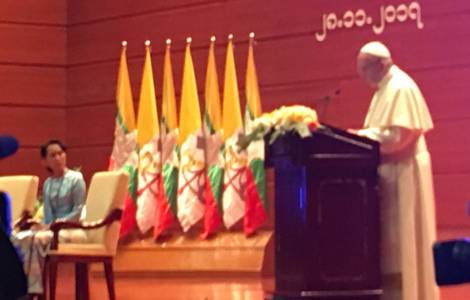 Nay Pyi Daw (Agenzia Fides) - The people of Myanmar «have suffered greatly, and continue to suffer, from civil conflict and hostilities that have lasted all too long and created deep divisions». «The healing of those wounds must be a paramount political and spiritual priority» in this phase of its history. And «the arduous process of peacebuilding and national reconciliation can only advance through a commitment to justice and respect for human rights». This is the constructive prospect, of shared commitment to the common good that Pope Francis highlighted to the institutions and the entire people of Myanmar in the first public talk of his trip in Burma, at the International Convention Center, in the new capital of the Country, Nay Pyi Taw, in front of government authorities, civil society representatives and members of the diplomatic corps.
Pope Francis expressed appreciation for «the efforts of the government» in facing the challenge of peace and reconciliation. Without explicitly mentioning the painful affairs of the Muslim minority of the Rohingya, the Bishop of Rome recalled that the process of national pacification «can only advance through a commitment to justice and respect for human rights» and that genuine integration «based on respect for the dignity and rights of each member of society, respect for each ethnic group and its identity».
Pope Francis recalled that the first intention of his trip to Myanmar is to «pray with the nation’s small but fervent Catholic community, and to encourage them in their efforts to contribute to the good of the nation». To the Pastors and the faithful of the Catholic Church, the Pope suggested to persevere «in their faith and to continue to express its message of reconciliation and brotherhood through charitable and humanitarian works that benefit society as a whole».
The Successor of Peter also pointed out the recent establishment of formal diplomatic relations between Myanmar and the Holy See. «I would like to see this decision, said the Pope, as a sign of the nation’s commitment to pursuing dialogue and constructive cooperation within the greater international community, even as it strives to renew the fabric of civil society».
To the Burmese authorities, Pope Francis also indicated the establishment of the United Nations and the Universal Declaration of Human Rights as «the basis for the international community’s efforts to promote justice, peace and human development worldwide, and to resolve conflicts through dialogue, not the use of force».
In the process of reconciliation in place in the Country, Pope Francis emphasized that the religions «can play a significant role in repairing the emotional, spiritual and psychological wounds of those who have suffered in the years of conflict». Different religious communities «can help to uproot the causes of conflict, build bridges of dialogue, seek justice and be a prophetic voice for all who suffer». This is why - the Pope acknowledged - «it is a great sign of hope that leaders of the various religious traditions in this country are making efforts to work together, in a spirit of harmony and mutual respect, for peace, for helping the poor and for educating in authentic religious and human values».
Looking at the future, Pope Francis also stressed that the hopes of the Country should be entrusted in particular to young people, who «are a gift to be cherished and encouraged, an investment that will yield a rich return if only they are given real opportunities for employment and quality education. This is an urgent requirement of intergenerational justice». (GV) Agenzia Fides, 28/11/2017)