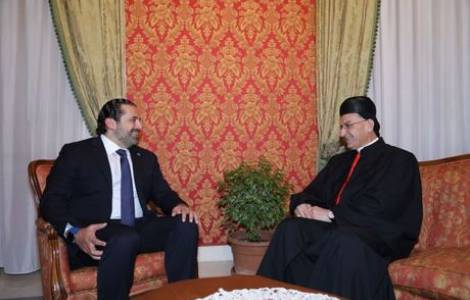 2020-12-15
Standstill in the formation of a government: Patriarch Younan recalls the shared responsibility of Christian politicians

Berkeley (Agenzia Fides) - Maronite Patriarch Bechara Boutros Rai will travel to Saudi Arabia, accepting the invitation of the local authorities, and on that occasion will also meet Lebanese resigning premier Saad Hariri, who announced his decision to leave office on Saturday, November 4, while he was in Riyadh. The official sources of the Maronite Patriarchate have confirmed that the patriarchal visit should take place next week, probably on Monday 13 November. The confirmation of the visit came after the meeting between the Patriarch and Lebanese President Michel Aoun, held at the Presidential Palace Thursday afternoon 9 November. In their conversation, Aoun and the Primate of the Maronite Church confirmed their consensus of views in the effort to guarantee national unity and prevent Lebanon from being devastated by the repositioning of the axes of regional strength that counterpose Saudi Arabia and Iran.
According to the spokespersons of the Maronite Patriarchate, the Patriarch’s visit will focus on the issues of dialogue, rejection of terrorism and extremism, and also the condition of Lebanese workers resident in Saudi Arabia, who are about 300 thousand according to data of the Lebanese Foreign Ministry.
The official invitation to visit Saudi Arabia and to meet King Salman and the Crown Prince, Mohamed bin Salman, was delivered to Patriarch Rai by Walid Bukhari, Saudi Chargé d'affaires in Lebanon, last Wednesday, November 1 (see Fides 3/11/2017). "The visit as such", said to Agenzia Fides Bishop Camillo Ballin MCCJ, Apostolic Vicar for North Arabia, "could be the beginning of a new attitude of Saudi Arabia towards other religions". In the past, among the Patriarchs of the East, only Greek Orthodox Patriarch of Antioch, Elias IV officially visited Saudi Arabia in 1975. Maronite Patriarch Rai is also a member of the Cardinal's College, and could become the first Cardinal to officially visit Saudi Arabia to meet with the authorities of the Country. Meanwhile, the resignation of Lebanese Prime Minister has also accentuated the political and geopolitical value of the patriarchal visit: in Lebanon there is growing controversy around the hypothesis that Hariri is not free to leave Saudi Arabia, or is under house arrest in Riyadh, because he is suspected of connivance with a supposed attempted coup d'etat attributed to Saudi prisoners imprisoned and politically eliminated on the disposition of hereditary Prince Mohammed Bin Salman.
According to the statements of the patriarchal spokesmen, the Primate of the Maronite Church will make Saudi officials understand the message that "Lebanon should not become a battle-field" among regional powers. Officially, President Aoun did not accept the resignation of Prime Minister Hariri, announced by Hariri himself. "Lebanon - added the spokespersons of the Maronite Patriarchate, on expressing the Patriarch's thought - must keep out of conflicts and regional axes, and try to be an oasis of peace, stability and dialogue, where different cultures and religions coexist and interact with civil society". (GV) (Agenzia Fides 10/11/2017)