AMERICA/BRAZIL - Synod for the Pan-Amazon region, a Tuyuka priest: "The Church promotes and enhances indigenous peoples" 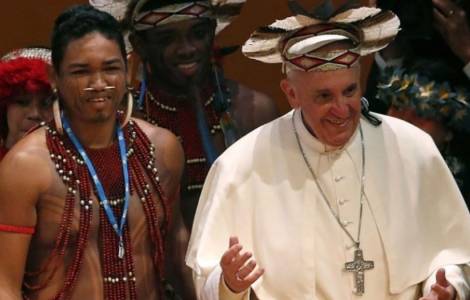 2020-05-04
Bishops reaffirm "the defense of democracy, for justice and for peace" in times of health crisis

2020-04-28
Suspension of masses for the pandemic is painful, but can help save lives

2020-04-20
Covid-19: "We entrust ourselves to Divine Providence", writes a missionary from the State of Roraima

Cachoeira (Agenzia Fides) - "One of the goals of the extraordinary Synod for the Pan-Amazon region is to identify new ways for the evangelization of indigenous peoples in all the Pan-Amazon regions. However, many of these people do not know anything about this Synod, for concrete reasons: many communities live far from urban centers and have no access to information. The issue is worrying. With this Synod, the Church takes on an important, religious, political, ethical, and moral role in the defense of biodiversity, biomes, forests, mountains, lakes, living beings and differences among populations": declares in an interview with Agenzia Fides father Justino Sarmento Rezende, of the Tuyuka ethnic group, who was born in Pari-Cachoeira, on the border between Brazil and Colombia, in the high Río Negro region. Father Justino is the first native Salesian who was ordained a priest about 23 years ago. In addition to being known and beloved among the Río Negro communities thanks to his work in various places and his commitment to indigenous education, he is also considered one of the Country's leading specialists.
Agenzia Fides interviewed Father Sarmento.

According to you, what should be the goals of the Synod of Bishops?
One of the goals is to identify new ways for the evangelization of indigenous peoples. In all parts of the Pan-Amazon regions, there are already good, innovative and successful experiences. But these are local experiences, of small groups and are not regional, national or global. The dioceses, although they work, they do not become a parameter for all communities.
Indigenous people are rich in cultural and linguistic differences. I believe that those who will be directly involved in the preparation of the Synod should enhance those experiences that are giving good results because they can give a good contribution to the synodal studies.

Are indigenous peoples aware of the realization of this Synod?
It is a problem that concerns us. I think many of them know nothing about it, for concrete reasons: many communities live far away from urban centers and have no access to information.
Priests and missionaries who know what it is about must become informers of this news of the convocation of the Synod. They have to involve communities to participate. It is important that indigenous leaders, extraordinary Ministers of the Eucharist, of the word; teachers, religious men and women, and indigenous priests participate and encourage events in which one studies, discusses and proposes issues that should be taken into consideration in the Synod.
I do not know how many indigenous priests we are in the Pan-Amazon region, but I hope that the Bishops of the dioceses where the indigenous are present will be their main interlocutors.

What does the Pope's decision represent for you?
For me, it means that the Church plays an important, religious, political, ethical, and moral role in defending biodiversity, biomes, forests, mountains, lakes, living beings, and differences among populations. Indigenous people, along with the rest of the planet, needs the continuity of these realities in order to survive. If we do not defend nature, it will go against human beings with violence. For us indigenous, our humans lives are closely related to living beings and nature. We defend those forms of life, respect them without destroying them, using only what is needed in a balanced way. When ambition destroys them, the negative consequences involve all people. That is why I believe that the Synod will be the occasion for important debates in several countries in the Pan-Amazon region.

Which topics should not be excluded from the synodal debate?
Study, in-depth analysis and creating tools that recognize and officiate celebrations in indigenous languages should not be excluded. Where they already exist, it will be necessary to motivate those who work with indigenous peoples to put into practice the orientations of the Synod. This implies learning local languages and cultures. The topics regarding ordained ministers, the diaconate, and the priesthood of married people cannot be excluded; there are different opinions about the indigenous people and bishops, but I think it is important to tackle the subject.

What do you expect from this event?
I hope it represents a new moment for the Church in the Amazon region. When I say Church I mean all the baptized, indigenous and not, religious men and women, people of different congregations, deacons, priests and bishops, catechists, extraordinary ministers, leaders and community animators.
I hope to help you understand the Amazonian world, the populations of the Amazon; may this Synod contribute to creating a new way of seeing the world and influencing the public policies of the Pan-Amazon region. I am working so it can be a special moment for us indigenous. (LG) (Agenzia Fides, 8/11/2017)

AFRICA/NIGERIA - A liturgy to invoke "peace and security" in Enugu after the murder of Fr. Paul Offu

AMERICA/PERU - The work of the Assembly of Bishops begins: "Synodality belongs to the whole Church"

AMERICA/COLOMBIA - Covid 19: social pastoral workers are a bridge among people in need

AFRICA/IVORY COAST - Coronavirus: in the face of the suspension of Masses, a parish priest in the streets with the Blessed Sacrament

AFRICA - Covid-19 and the re-opening of churches in Africa: hope at the center of the mission

AMERICA - "Time of pandemic, time of opportunity in the light of Laudato Sì": Laudato Sì week