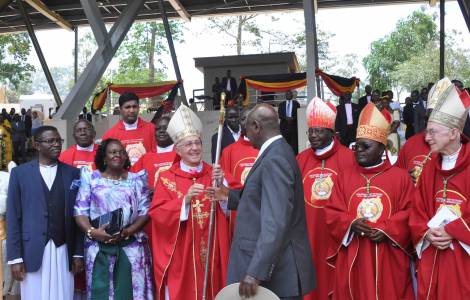 2019-07-29
Bishops call for the protection of minors against child trafficking, child labor and child soldiers

Kampala (Agenzia Fides) - "The past half-century has mainly been a period of consolidation of the excellent work begun by the missionaries. The coming 50 years should be, among other things, a period of deeper growth in faith and charity...
A new engagement in evangelization should make the Gospel penetrate in a deeper way, not only in the individual person but also in the human society. The Church and the society must collaborate closely to find the resources necessary to renew and build up a culture of love, reconciliation, justice and peace". This is what Cardinal Fernando Filoni, Prefect of the Congregation for the Evangelization of Peoples said on concluding the festivities for the 50th anniversary of foundation (see Fides 26/10/2017).
Yesterday Cardinal Filoni presided yesterday, on Sunday 29 October, a solemn Eucharistic concelebration at Namugongo Uganda Martyrs Shrine attended by Bishops, priests, religious men and women, civil authorities and many faithful.
Taking a cue from the biblical readings of the day, the Prefect highlighted the Lord's twofold commandment, to love God and to love one’s neighbor: "Like the two faces of the same coin, the two commandments cannot be separated, the first commandment is inseparably connected with the second". This implies that the way we treat others is object of God’s concern. A lack of solidarity towards the needy will directly affect our relationship with God. "It is not enough just not to mistreat the needy- the Cardinal emphasized -, the love of neighbor demands that we be docile and attentive to the cry of the poor and come to their aid".
"I have learnt - he continued, "that Kampala Metropolitan area has seen massive movements of Ugandans who arrive in hope of jobs and a better life. Many have not reached these goals and remain on the peripheries of society. We also know that in the Gulu Ecclesiastical Province hundreds of thousands of refugees from South Sudan are looking for shelter to save their life from violence. We should seek to reach out to them with the love and mercy of Christ; if we do not, there are many others claiming to be prophets, apostles and healers who will. We must not let them be abandoned to themselves. Perhaps we cannot do a lot at this moment, but it is important to get to know them, whether they be Catholic or of another denomination". That is part of what Pope Francis calls "going to the existential peripheries of society".
Love is not exhausted in relationships between individuals but spreads also into the social and political community.
"Social charity makes us love the common good; it makes us effectively seek the good of all people, considered not only as individuals or private persons but also in the social dimension that unites them". On the occasion of a jubilee, the People of God, as attested by the the Old Testament, were to reach out to their neighbors by forgiving debts, by returning alienated property to the original owners and by liberating people from slavery and servitude. A jubilee was a time to help one’s neighbor get a fresh start. In the New Testament, Jesus presents himself as the One who brings the old jubilee to completion.
"All this - Cardinal Filoni continued - points to the fact that community Jubilees have an important dimension worth noting. I would like now to reiterate what I have been also saying to various groups in the past days. This Golden Jubilee marks an important step in the life of this Archdiocesan Church. Mine is a call for a beginning of a new engagement; indeed, a favorable time to create new prospects; to mark out the path of the Catholic Church in Kampala for the coming 50 years. What kind of Church do we want to be, within the context of the Universal Church? What is our role in the context of Africa and of our Country? " The answers to these questions must be consistent with the guidelines offered by the Second Vatican Council and by other magisterial documents, especially those dedicated to the Church in Africa. "The Archdiocese of Kampala was erected in the wake of the Second Vatican Council", the Cardinal said. It is our ardent hope that this local Church will continue being a loyal implementer of the inexhaustible richness of that great ecclesial event". (SL) (Agenzia Fides, 30/10/2017)

ASIA/PHILIPPINES - Evangelization, faith, dialogue: the Church of Manila in assembly

ASIA/PHILIPPINES - Evangelization, faith, dialogue: the Church of Manila in assembly

AMERICA/BOLIVIA - "Let us allow ourselves to be enlightened by the Word of God and give priority to the protection of democracy" urges Mgr. Sergio Gualberti