AFRICA/SOUTH SUDAN - Peace is built with prayer: visit of the Community of Taizé in South Sudan 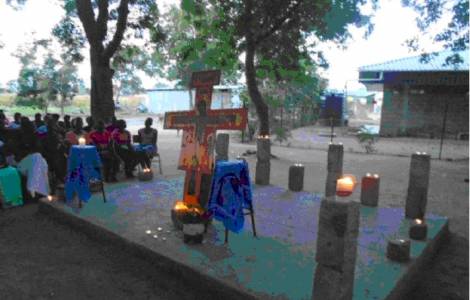 2022-03-25
A new beginning for the Catholic Church: Father Christian Carlassare is ordained bishop in Rumbek

2022-03-11
Humility and trust in God: the date of the episcopal ordination of Bishop Carlassare is announced

Rumbek (Agenzia Fides) - Peace is born from the heart of every man and is built in society and in the nation through prayer: this is the message left by the representatives of the Community of Taizé to the youngsters in schools in South Sudan. As Fides learns, the girls of a Catholic secondary school in South Sudan, under the guidance of the Sisters of Loreto, continue to draw inspiration from the Community of Taizé, an ecumenical community founded in France.
Sister Orla Treacy, headmistress of the “Loreto Girls Secondary School” in the Catholic Diocese of Rumbek in South Sudan, told Fides about the meeting between the girls of her institute and the communities of Taizé present in Kenya and France: "We nurtured a long friendship with the community of Taize in Kenya, thanks to visits by brother Luc from Nairobi in South Sudan. Last year, two of our graduates spent three months with the community and with the young of Taizé in France", continues Sister Orla.
116 young students graduated at the "Loreto Girls Secondary School" in Rumbek between 2011 and 2017 and currently the school has 240 girls enrolled. Speaking of the recent visit by two brothers of Taizé at the school in South Sudan, Sister Orla tells Fides about the students’ appreciation for the message of the community of Taizé: "the message of Taizé is that of reconciliation and peace. We had asked brother Luc to come back and share with us the spirit of their community and we were even happier when he told me that even brother Alois, the Prior of Taizé, would gladly come to visit South Sudan".
The two brothers of Taizé spent several days in Juba before coming to Rumbek. In Juba, they visited displaced persons in refugee camps. When they arrived in Rumbek, they visited the local Catholic and religious communities, while also spending a morning visiting the leprosy just outside of Rumbek. In the afternoon, the meeting was held with the young people with whom they prayed, read the Bible, sung.
Sister Orla explains to Fides: "Given the situation we live in South Sudan, despite the difficulties and conflictual social climate, we always try to find ways to help girls connect deeply with God and find peace within themselves". And the girls have learned to appreciate and love the style of prayer and the songs of the community of Taizé, continuing to pray that way even when the two brothers left".
South Sudan, the youngest nation in the world, after several months of political tensions, sunk in a civil war in December 2013 when faithful security officers clashed with those loyal to Vice President Riek Machar.
In this context, the message left by brother Luc "was a message of peace and strong encouragement. Brother Alois reminded the girls of praying for peace in South Sudan and the youth of South Sudan. He invited the girls to bring the light of Christ into their lives, the only one that can give hope and peace to each heart", concludes Sister Orla Treacy. (PA/BO) (Agenzia Fides, 13/10/2017)