ASIA/INDIA - Orissa, theater of anti-Christian violence, becomes a place of pilgrimage and inspiration 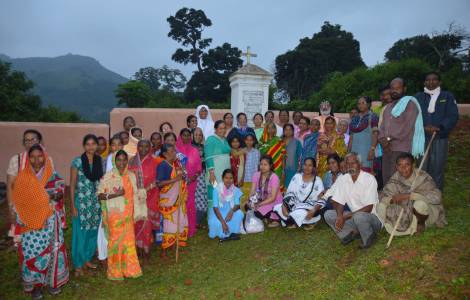 Bhubaneswar (Agenzia Fides) – The victims of anti-Christian violence perpetrated in the Indian state of Orissa in 2007 and 2008 "are testimonies of authentic faith, that overcame difficulties and persecution, and today inspire many people in India and abroad": says Archbishop John Barwa, at the head of the Archdiocese of Cuttack-Bhubaneswar, in the Indian state of Orissa (or Odisha), to Agenzia Fides. The district of Kandhamal, theater of that violence, has become a "place of pilgrimage where one listens to the testimony of survivors and therefore share solidarity with the victims, who are economically poor people, but strong and rich spiritually", explains the Bishop
As Fides learns, a delegation of 45 women, representatives of 14 Indian regions, convened by the Bishops' Conference of India for the National Meeting on "The Role of Women in creating the Family" gathered in Kandhamal. The delegation was led by Mgr. Jacob Mar Barnabas, President of the National Bishops' Commission for Women and by Sister Talisha Nadukudiyil, Secretary of the Commission.
After the visit, Mgr. Jacob Mar Barnabas told Fides: "We visited a land of martyrs, we have a rich experience of faith that we must proclaim. These people need our solidarity. We shared their pain and suffering lived through faith in Jesus. These people shared his same cross. We too are called to live and proclaim that Christ is the Lord, like the people of Kandhamal. Their experience can be very important especially for young Indians".
"We are called not to be just spectators. Before our brothers and sisters who have shown so much courage in defending faith, it is not enough to show sympathy and to listen to their story: it is necessary to engage, as a unique community, for the entire process of reconstruction. Only then our visit will be fruitful. This is a task for the entire Church in India", added Mgr. Barnabas.
"My husband sacrificed his life so as not to not deny Christ. His sacrifice made me stronger in faith in Jesus. Every single breath I take today is the breath of faith in Jesus, which my husband witnessed with his life", said to those present widow Kanakarekha Nayak, wife of Christian Parikit Nayak, attacked and tortured by Hindu militants.
"This visit caused emotion and I was really inspired and strengthened in the faith in Jesus", says Chinama Jacob, a Catholic woman of Delhi, after listening to these stories. "I would like to come to Kandhamal and teach local students", adds Mary Lucia from Tamil Nadu.
"Many women expressed the desire to economically and materially help the local community", says Sister Bibiana Barla, regional secretary of the Bishop’s Commission in Orissa.
The whole group of women experienced so much love and affection from the villagers, despite their suffering and poverty. "Even if the people are poor and illiterate, their faith is firm in God's word", explains to Fides sister Talisha Nadukudiyil, promising commitment to nurturing co-operation and friendship.
In the wake of indiscriminate violence perpetrated in Kandhamal in 2008, about 100 Christians were killed by militant Hindu extremists, and the violence engulfed 600 Christian villages, 5,600 homes were looted, 295 churches and other places of worship destroyed, including 13 schools and leprosies. About 56,000 Christians in Kandhamal had to flee to save themselves and became refugees. During the violence, the faithful were told that the condition for them to remain in that district was to become a Hindu. (PA) (Agenzia Fides, 12/10/2017)