ASIA/INDIA - In Orissa, the first tribal university for 27,000 indigenous students 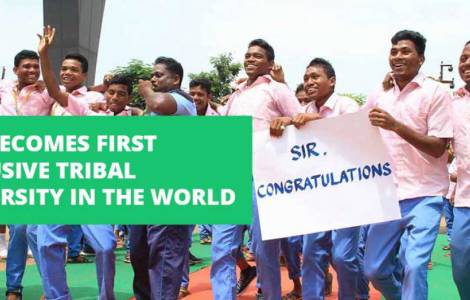 Bhubaneswar (Agenzia Fides) - The Kalinga Institute of Social Sciences (Kiss) is the first tribal university in social sciences in the world. Situated in the State of Odisha (or Orissa), in East India, the Institute was founded in 1993 as a
tribal residential school, and on August 26, 2017 became the first tribal university in the world. Destined for families who cannot bear the cost of education, Kiss aims at eradicating poverty through quality education for the poorest students in the country. The Annual Report sent to Fides by the priest of Orissa Fr. Purushottam Nayak, reads that as many as 27,000 poorest of the poor indigenous children are provided free education, lodging, food, healthcare and are prepared to be "agents of change" for their community and protect traditions, cultures, and tribal values. It is a real "pastoral project" in favor of the indigenous peoples, notes the priest, with the aim of eliminating poverty and strengthening the most disadvantaged sectors of society through global education. The tribal children are provided education from kindergarten to post graduation. 60% of the students are female.
The university also offers professional training courses, including sewing, carpentry, agriculture. An important space is also reserved for sports: football, rugby and athletics. At present Kiss is a complex of 400,000 square meters where school buildings, dormitories, canteens, gymnasiums, sport fields and an ever-operating hospital are built. The Institute plans to set up branches in 30 districts of Odisha and all the states of India.
According to Father Nayak, there are 62 tribes in the Indian state of Orissa, of which 13 are primitive. They speak 72 mother tongues grouped in 38 languages, of which 19 have almost become extinct. Only four tribal languages, Santhali, Ho, Sora and Kui Lipi, have written characters. Traditionally these tribal peoples are simple and pacific. They believe in traditional values and preserve ancient social customs that have been passed on from generation to generation. Excluded from the four castes that make up the Hindu social organization, the tribals (and therefore counted among the dalit, the outcast) suffered thousands of years of discrimination and extreme poverty. Even though the casting system is officially banned from the Indian Constitution, it remains in force in social practice, and the Dalits are still at the margins of economic, social and political life, ending up carrying out the most humble and degrading tasks in the eyes of Orthodox Hindus, who consider them "untouchable". Through the work of education, the tribal university intends to favor social promotion and the full inclusion of indigenous groups in Indian society. (PN/AP) (Agenzia Fides, 25/9/2017)