ASIA/JAPAN - Cardinal Filoni: Hiroshima is the place where Christ renewed his sacrifice in the twentieth century 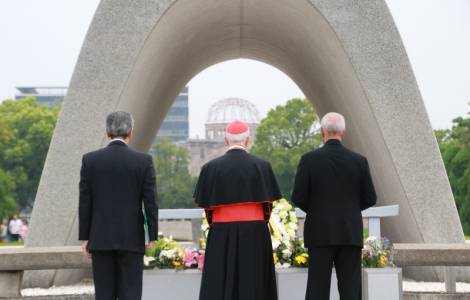 2019-11-25
The Pope to Japanese Catholics: to recognize God’s gift means to free ourselves from perfectionism

Hiroshima (Agenzia Fides) - Hiroshima "is the place where Christ renewed his sacrifice in the twentieth century". And even for the Catholic Church, Hiroshima "today means a city of peace, in which God has not forgotten man, he is not hidden but lives there". Thus, Cardinal Fernando Filoni, Prefect of the Congregation for the Evangelization of Peoples, expressed a glance of faith on the spiritual vocation, universally recognized, of the Japanese city, where on August 6, 1945, the first atomic massacre of human history was carried out. This is what the Cardinal said his speech on Wednesday, September 20, to priests, religious men and women, consecrated faithful and lay persons, of the Archdiocese of Hiroshima, whom he met on the fourth day of his visit in Japan. "Here", continued the Prefect of Propaganda Fide "Christ crucified continues, from above of this new Golgotha, to admonish all people" including those who in the name of religions "foment hatred, divisions and wars". The call to Christ's presence in world affairs offered the Cardinal the occasion to also suggest the Catholics of the Archdiocese ways to give space to "a renewed missionary impulse just as the Pope Francis urges in the Evangelii gaudium". The Archdiocese of Hiroshima extends over a territory that hosts 7 million inhabitants, and where the Catholic baptized are about 20,000. "Is Christ known here? Does he have a place? Does he have a salvation to propose? Is the kingdom of God announced here? "These" suggested the Cardinal "are the questions to answer. As we admire the past missionary work, we cannot be the simple administrators of those results. If there is no motivation for missionary life, there will also be no generosity and apostolic zeal; there will be no joy of evangelizing".
"From the glory, grace and truth brought by Christ" - added the Prefect - "the people of Japan cannot be excluded. God has not stopped at the doors of this Country, which although noble and cultured, awaits the Kingdom of God: Say to the blind, to the deaf, to the sick, to the poor, to those who are hopeless, or suffer from the division of families or drug addicts, or who thinks suicide is the only way to end the desolation and desperation that there is a Good News for them".
In his visit to Hiroshima, Cardinal Fernando Filoni paid homage to the Monument of Peace and of the Atomic Bomb. (GV) (Agenzia Fides, 20/9/2017)