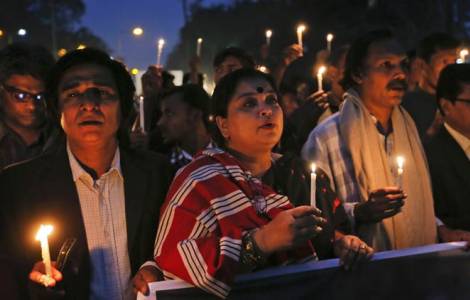 2020-12-29
Radio Veritas in Bengali, a station also listened to by Muslims, celebrates 40 years of proclaiming the Gospel

2020-12-03
Bangladeshi Christians ask for the release of Jesuit Fr. Stan Swamy in India

2020-11-26
The new Archbishop of Dhaka: priority to be given to the family, the “powerhouse” of the Gospel

Dhaka (Agenzia Fides) - Over the last three years, religious minorities in Bangladesh have faced targeted attacks. During and after the 2014 elections, villages inhabited by non-Muslim religious groups were subjected to assaults and individuals and groups linked to Islamist parties ransacked and burned the property and residence of Hindu, Christian and Buddhist citizens in different parts of the country. This is what Agenzia Fides learns from a report drawn up by the "Christian Conference of Asia" (CCA), a union between several Presbyterian Christian Churches in Asia, which has sent a delegation to investigate the situation of religious minorities in Bangladesh. The delegation, composed of representatives of various religious groups, notes that some political parties deliberately took advantage of the religious feelings of ordinary people to intensify inter-communal tension and polarization, simply to profit from a political point of view. Human rights activists have not been spared: "For the past two years, at least 10 lay bloggers, journalists, and human rights activists have been killed only because promoters of freedom of thought, religious harmony, tolerance and political transparency", notes the delegation.
During a visit, which lasted a few days, the CCA team met with various civil society organizations, representatives of minority religious groups, churches, ecumenical organizations, and social activists. The sentiment that combines the lives of religious minorities in Bangladesh is fear, the Commission notes. Extremist violence is a recurring problem in the country, where religious minorities have suffered intimidation, threats and violence by extremist Islamic groups.
A widespread phenomenon is land grabbing: At least 431,000, reads the note sent to Fides, people mostly belonging to indigenous peoples and religious minorities, are internally displaced, victims of conflict or were driven out of their lands.
About 170 million people, Sunni Muslims account for 90% of the population, Hindus are 9%, while other communities (Christians, Buddhists, Shia Muslims, Ahmadiyyah) account for about 1% of the population (PA-SD) (Agenzia Fides, 17/5/2017)

ASIA/MYANMAR - Electoral victory of the National League for Democracy, which opens up to ethnic parties

AMERICA/ARGENTINA - Bishops: "The Church does not approve the invasion of lands"