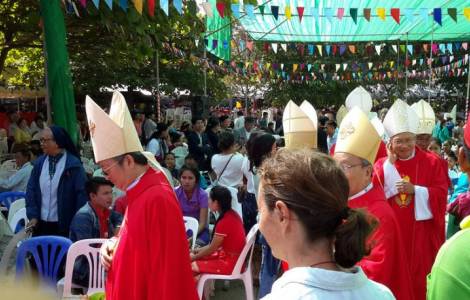 Vatican City (Agenzia Fides) - The small Catholic community in Laos (less than 1% out of seven million inhabitants) is preparing to celebrate two new priestly ordinations in 2017: say to Agenzia Fides the Laotian Bishops that concluded the ad limina visit at the Vatican. One of the deacons who is preparing for his priestly ordination - programmed in the current year, belongs to the Apostolic Vicariate of Pakse, the other belongs to Luang Prabang. Louis-Marie Ling, Apostolic Vicar of Pakse, tells Fides is "hopeful", after the solemn public celebration of the beatification of the martyrs: "It was a feast with more than seven thousand faithful, a historical event, a miracle for us".
The pastoral activities, Ling says to Fides, proceed calmly, "we sometimes have some small problems with some diligent provincial officials, but as priests and religious we visit families, we celebrate the sacraments, we do catechism without problems". With the new deacon, whose ordination is scheduled for next March, "I will have five active and two retired priests in Pakse", he says. They are entrusted parishes and over 13 thousand faithful of the Vicariate. "It is not my job nor my merit, everything is God's work. We follow the inspiration of the Holy Spirit", confides the Bishop to Fides.
Even Tito Banchong, apostolic administrator in Luang Prabang, in the north of the country, celebrated the ordination of three priests in September 2016 and is preparing for the gift of another vocation. "In my area, where for 12 years, from 2000 onwards, I was completely alone, we are blessed with the thriving of vocations to priesthood: a sign that the Lord is near. He is the God-with-us. And he was also with us in the time of suffering", says the Bishop, who between 1976 and 1986 spent five years in prison, when the pressure of the communist Pathet Lao regime on religious freedom was stronger.
On 30 January in his homily during Mass in the Casa Santa Marta, before the Bishops of Laos, Pope Francis said that "the greatest strength of the Church today is in the little Churches, tiny, with few people, persecuted, with their bishops in prison. This is our glory today, and our strength today".
At the end of the ad limina visit, Bishop Tito Banchong remarked: "We are very happy. This visit gave us the certainty of unity with the Pope. The Pope knows us, loves us, has opened his heart. He is really a father for us who listens to us. He told us to move forward in our mission: it is for us a precious encouragement". (PA) (Agenzia Fides 01/02/2017)

AFRICA/NIGERIA - Another priest kidnapped in Nigeria

AFRICA/GUINEA - The clergy: "We are concerned about the social and political crisis that leads young people to flee"