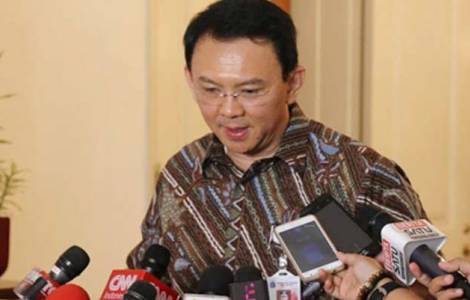 Jakarta (Agenzia Fides) - The Christian governor of Jakarta, Basuki Tjahaja Purnama, said "Ahok", will be taken to trial on December 13 by the North Jakarta District Court for the case of alleged blasphemy against him, and that last month caused mass demonstrations by his opponents and supporters in Indonesia. As announced by the Court, the case will be judged by a panel led by chief judge Dwiarso Budi Santiarto, flanked by four other judges. The hearings will be held at the Central District Court of Jakarta. Given the great public attention, the Prosecution has formed a team of 13 senior officials who will act as prosecutors, and will be engaged in the investigation.
The trial is expected to end a story that is shaking the nation: after the massive demonstration on November 4, when Islamic extremist groups led thousands of people in the streets, demanding the indictment and the arrest of the governor, a second peaceful demonstration was held on November 30 to reaffirm the principles of tolerance, love, unity in diversity, legality, peace with the participation of millions of Indonesian citizens, belonging to all religious communities, who shared a large "prayer for unity", launching a message of peace.
On Friday, December 2 there was a new large assembly in the park of Jakarta's National Monument, in which the Muslim faithful prayed and asked again the judiciary to arrest the governor.
Indonesian Christians, along with many Muslims, joined the prayer for peace, agreeing on the urgency of promoting the good of the country, respect for democracy and the "Pancasila", the five principles that are at the basis of the Indonesian Constitution and civil society in the archipelago.
Ahok is accused of blasphemy after a speech last September, in which he announced the candidacy for governor, and quoted the verse of a sura of the Koran, saying that every Indonesian citizen has a legitimate right to vote for him, while some Islamic leaders claimed that, according to the Quran, only a Muslim can guide other Muslims.
According to political observers, in Indonesia there is an ongoing confrontation between the front of reformers led by President Joko Widodo and governor Ahok, and oppositions of former President Susilo Bambang Yudhoyono, who are using militant Islam as a means to counter the reformists. The accusation of blasphemy against the governor of Jakarta should be inserted in this frame of exploitation of the Islamic faith. (PA) (Agenzia Fides 07/12/2016)