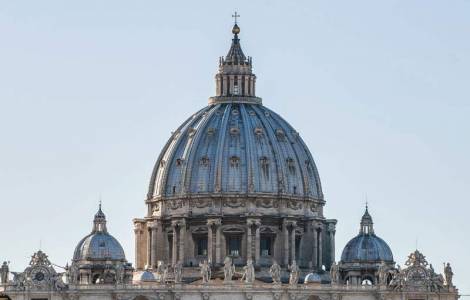 Vatican City (Agenzia Fides) - "This Year of Mercy invites us to rediscover the core, to return to what is essential. This time of mercy calls us to look to the true face of our King, the one that shines out at Easter, and to rediscover the youthful, beautiful face of the Church, the face that is radiant when it is welcoming, free, faithful, poor in means but rich in love, on mission". This is what the Holy Father said during the homily on Sunday 20 November, solemnity of Christ the King, during the Mass he presided in St. Peter's square for the closing of the Jubilee of Mercy. The Pope concelebrated Mass with the newly appointed Cardinals in the Consistory the day before (see Fides 10/10/2016).
"Today, dear brothers and sisters - said Pope Francis - we proclaim this singular victory, by which Jesus became the King of every age, the Lord of history: with the sole power of love, which is the nature of God, his very life, and which has no end. We joyfully share the splendour of having Jesus as our King: his rule of love transforms sin into grace, death into resurrection, fear into trust. It would mean very little, however, if we believed Jesus was King of the universe, but did not make him Lord of our lives: all this is empty if we do not personally accept Jesus and if we do not also accept his way of being King".
Commenting on the Sunday Gospel passage, the Pope said among other things that "a people who are holy, however, who have Jesus as their King, are called to follow his way of tangible love" and that "God has no memory of sin, but only of us, of each of us, we who are his beloved children. And he believes that it is always possible to start anew, to raise ourselves up".
Finally Pope Francis urged: "Let us ask for the grace of never closing the doors of reconciliation and pardon, but rather of knowing how to go beyond evil and differences, opening every possible pathway of hope. As God believes in us, infinitely beyond any merits we have, so too we are called to instil hope and provide opportunities to others. Because even if the Holy Door closes, the true door of mercy which is the heart of Christ always remains open wide for us". (SL) (Agenzia Fides 21/11/2016)

EUROPE/ITALY - Cardinal Filoni at the 'Perdonanza bibionese': "Christ has tattooed our name on his hands"