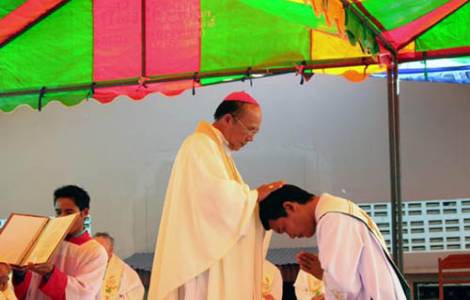 Luang Prabang (Agenzia Fides) - "First of all let us thank the Lord for his great gift: we are very happy for the three new priests who will work full time in the small Catholic Church in Laos. All three will dedicate themselves, in particular, to the pastoral work in the Vicariate of Luang Prabang: for me it will be a great help": this is how Mgr. Tito Banchong Thopanhong, Apostolic Administrator of Luang Prabang, expresses his joy to Agenzia Fides for the ordination of three new Laotian priests: Don Paolo Lattana Sunthon, Don Agostino Saegna Sii Bunti, Don Michael Kanthak Vilae Luong Di, all belonging to the Apostolic Vicariate of Luang Prabang, who were ordained in a solemn celebration held on 16 September in Savannakhet, where the Major interdiocesan Seminary that provides the formation of Laotian seminarians is situated.
At the ordination Mass, presided by His Exc. Mgr. Prida Inthirath, Apostolic Vicar of Savannakhet, the other two Laotian Bishops (from the Apostolic Vicariate of Vientiane and Paksè, in addition to the Apostolic Administrator of Luang Prabang) were present as well as two other Bishops (one from Thailand and one from France), 54 priests from Laos, Vietnam, Thailand, numerous religious women and over a thousand Catholic faithful who came from all over the country.
Mgr. Tito Banchong told Fides: "It was a moment of intense prayer and of great hope for us. A historic moment, in which we received a special effusion of God's grace. Everything was done in the best way, in an atmosphere of great serenity. Civil authorities from the town of Savannakhet were also present. It was a very happy moment for all of us".
In 2005 in Vientiane, thirty years after the last ordination in 1975, Sophone Vilavongsy was ordained priest, Laotian and missionary of the Oblates of Mary Immaculate (OMI). In December 2006 Pierre Wilaiphorn Phonasa and Luke Sukpaphorn Duangchansai were ordained priests. In 2009 in Savannakhet it was the turn of Fr. Matthieu Somdet Kaluan. In 2011 another new priest: Fr. Pierre Buntha Silaphet.
Of about 6 million people, mostly Buddhists, about 1% are Christians in Laos among whom about 45 thousand Catholics. Besides the three Apostolic Vicars, the number of diocesan priests in the country with the three newly ordained priests goes up to 20, while 11 are religious priests.
The church in Laos is now preparing to celebrate the beatification of 17 Laotian martyrs, to be held in Vientiane on 11 December. In 2015 the Holy See recognized the martyrdom of Father Mario Borzaga, a young missionary of the Oblates of Mary Immaculate, and the Laotian catechist Paul. There was also the successful outcome of a second cause of beatification regarding 15 other martyrs, including missionaries and lay Laotians. (PA) (Agenzia Fides 27/09/2016)