ASIA/SYRIA - The Patriarchs of Antioch remember the two Bishops kidnapped: "We do not have the support of the 'giants'. Our only hope is in the Lord" 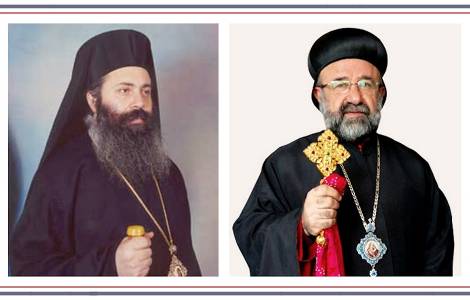 Aleppo (Agenzia Fides) - Three years since the disappearance of 2 Metropolitan Bishops of Aleppo - Syrian Orthodox Mar Gregorios Yohanna Ibrahim and Greek Orthodox Boulos Yazigi – the Syrian Orthodox Patriarch of Antioch, Mar Ignatius Aphrem II, and the Greek Orthodox Patriarch of Antioch, Yohanna X, remember the story of the two confreres kidnapped near Aleppo on April 22, 2013 in a long and intense message addressed to their "beloved spiritual children", to the Syrians and to all men.
The case of the two Bishops - says the message kidnapped, sent to Agenzia Fides - is "a miniature of the great human suffering coming from terrorism: massacres, abductions, deracination, takfir, and explosions". But if the intention of the kidnapping was to spread terror among the baptized, the two Patriarchs warn that the operation failed: "We Christians", reads the document "are the descendants of those who, two thousand years ago, put on the name of Christ in this particular land. (…). We are no giants, and we do not have the support of the “giants”", but "we preserve our identity as Antiochian Easterners, through whatever difficulties or tribulations". "In this troubled path - underline the two Patriarchs - we have spared no effort, but our main and only hope is in God".
The words of the Primates of the two Churches of the East sweep away all the maneuvers of those who seek to exploit the suffering of Christians in the Middle East: "We shall continue to live in this East, ringing our bells, building our churches, and lifting up our Crosses. And the arm that will be extended to these Crosses or bells will be twisted by our Muslim brethren from all our national spectra", says the long patriarchal text, where it repeats that the followers of Islam "are suffering like us from the bitterness of blind terrorism and takfir", defined as "a condemned intruder" to our past and present Christian-Muslim relationships. The sufferings of the Eastern Christian are read in the light of salvation promised by Christ: "Despite the horror of the situation and its severity" - write the Patriarchs Mar Aphrem and Boulos - "we throw all this on the way of Golgotha of our Lord Jesus Christ. We cover all the darkness of this age with the light of the Virgin’s eyes, venerated by both Christians and Muslims, whom we implore to bring back to us all kidnapped people, our brother bishops of Aleppo, along with the abducted priests".
In the document, the two Patriarchs highlight the way in which the lives of Christians in the Middle East are also reported in the global media debate. "We" the message reads "were not a minority, and will never be". For those "who are keen about the “minorities,” and those who are opening wide the doors to receive the various spectra of Syrians, the two Patriarchs repeat that it is more fitting for them to seek a resolution, saving people from the burden of the perilous sea travel and ship wreckage.
"We appreciate every humanitarian effort of governments or organizations. However, insist the two Patriarchs, we cannot be protected through facilitating the migration of refugees. We are not petitioning for protection. Rather, we are seeking peace". A peace that "is not founded on the notions of minorities and majorities, but is based on coexistence, citizenship and moderate religious discourse. Peace does not come by enforcing economic blockades and foreign economic sanctions that only hurt the homeless children and the poor people, those people who became cheap commodities for the arms’ market, used according to countries’ interests".
Returning to the case of the Bishops kidnapped, in the final part of the document, the two Patriarchs thank the international community for the many public expressions of solidarity received, but invite all, starting with "decision-maker countries", to replace "statements of condemnation and promises" with concrete initiatives that document in facts good intentions.
The two Patriarchs invite all their brothers in faith to also look at their own suffering in the light of the Risen Christ, the one who can "comfort the heart of our children, and establish peace in the land of peace. This land of the East", said the statement "is bleeding now, but no doubt will rise again. We are the children of the Resurrection, and the Light". (GV) (Agenzia Fides 22/04/2016)